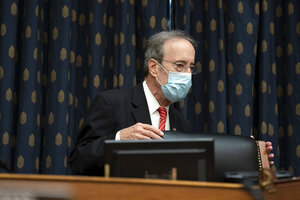 NEW YORK (AP) — A U.S. congressional commission has proposed replacing the U.S. drug certification process — a fixture of U.S. anti-narcotics policy that classifies countries based on their cooperation on the fight on drugs — with more nuanced diplomatic approaches to keep up with rapidly changing threats like synthetic drugs.

The 117-page report from the Western Hemisphere Drug Policy Commission, released on Tuesday, proposes to eliminate the Drugs Majors List of drug-producing or drug-trafficking countries, calling it “increasingly anachronistic” and offensive to partners.

Congress currently requires the president to identify countries and certify their cooperation with U.S. counternarcotic policies.

“The concept of a Majors List of countries of particular interest, with numerical definitions of drug cultivation or production (mainly plant-based), cannot keep pace with rapidly changing threats from synthetic drugs produced in and shipped from almost anywhere in the world,” the report said.

“A requirement for a theatrical public rollout of our ‘naughty and nice’ countries is similarly outdated”, the report adds.

Rep. Eliot Engel, chairman of the House Committee on Foreign Affairs, released the report on Tuesday, calling it “a breath of fresh air” and saying he hopes “it will serve as a blueprint” for the upcoming Joe Biden administration. On Thursday the Foreign Affairs Committee will hold a hearing to examine the bipartisan commission’s findings.

According to the report, today’s drug markets are more diversified than in the past and keeping a list of drug-trafficking countries current “would mean constant updating of the law’s parameters to keep pace with drug trends,” the report said.

“Critics also contend that the ‘name and shame’ approach generates resentment, undermining the principle of shared responsibility, which recognized the role of U.S. demand for illicit drugs as well as Latin American supply,” the report said.

The commission also claimed in the report that the U.S. designation of countries that have “failed demonstrably” to meet its drug control obligations have often not been effective. It mentioned the case of Bolivia, whose designation “had little impact on the government of former President Evo Morales” and also “had little impact on US drug supply”.

Engel said in a press release on Tuesday that billions of U.S. taxpayer dollars “have been spent on counternarcotics efforts in Latin America and the Caribbean, but the results have been few and far between”.

The report recommends, among other things, to empower the State Department to develop and coordinate efforts to counter transnational criminal organizations abroad and to develop compact-based counternarcotics and law enforcement assistance programs with foreign partners.