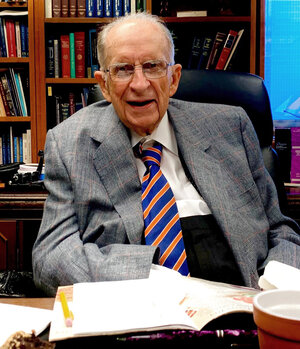 HOUSTON (AP) — Thomas M. Reavley, the oldest active federal judge who served for 41 years on the 5th U.S. Circuit Court of Appeals, has died. He was 99.

Reavley died on Tuesday in Houston, the Texas Supreme Court announced. His health had been in decline during the past year, said Bryan A. Garner, one of Reavley’s former law clerks.

He had served nine years on the Texas Supreme Court, the state’s top civil court, before being appointed to the appeals court by President Jimmy Carter in 1979.

Reavley took senior status in 1990 but maintained a mostly full caseload until 2019. His legal career spanned more than six decades.

“He was a towering figure in Texas and a true champion of justice for the state and the country,” said Texas Supreme Court Chief Justice Nathan L. Hecht.

A lay Methodist minister and Sunday school teacher, Reavley’s nickname was “Pope of the Fifth Circuit.”

Reavley is survived by his wife, Carolyn Dineen King, who is also a judge on the 5th Circuit, and four children.

He had been married to his first wife, Florence Wilson Reavley, for 60 years. She died in 2003. He married King in 2004 and the couple had said that before Florence Reavley died, she told them to get remarried.

Reavley grew up in Nacogdoches, graduated from the University of Texas in Austin in 1942 and then enlisted in the U.S. Navy. He was a lieutenant who drove President Franklin Roosevelt to Roosevelt’s meeting with Winston Churchill and Joseph Stalin at Yalta, where the post-World War II fate of Germany was discussed.

He earned his law degree from Harvard in 1948 and served as a prosecutor, local judge and state government official before serving on the Texas Supreme Court and 5th Circuit.

Funeral services in Houston are pending.