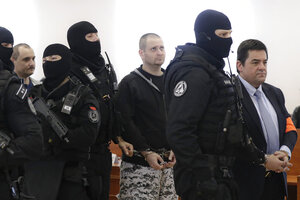 BRATISLAVA, Slovakia (AP) — The Supreme Court of Slovakia on Wednesday increased the prison sentence of a former soldier convicted of killing an investigative journalist and his fiancée, a case that triggered a political crisis and brought down the country’s government.

In April, a lower court gave Miroslav Marcek a 23-year prison term for the contract killings of Jan Kuciak and Martina Kusnirova in February 2018. The high court increased the sentence to 25 years.

Marcek had pleaded guilty to fatally shooting the two but appealed as did the prosecutors.

The verdict by the Supreme Court is final.

In September, a court acquitted a businessman, Marian Kocner, who was accused of masterminding the slayings, and one of his co-defendants.

Prosecutors appealed the verdicts but the Supreme Court has yet to rule on that.

Kuciak had been investigating possible government corruption. The killings prompted major street protests and a political crisis that led to the government’s collapse.

Two other defendants have been sentenced in the case.

One received 25 years in prison in September for his role. The other, who had acted as a go-between, agreed to cooperate with prosecutors in exchange for a lesser sentence and received a 15-year prison term in December.