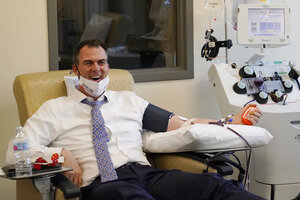 OKLAHOMA CITY (AP) — As the coronavirus surges in Oklahoma, nearing 200,000 total cases on Tuesday, Gov. Kevin Stitt declared Thursday a day of prayer and fasting in the state.

“I believe we must continue to ask God to heal those who are sick, comfort those who are hurting and provide renewed strength and wisdom to all who are managing the effects of COVID-19,” the Republican governor said in a Monday statement.

Governors from both parties have made similar declarations amid the coronavirus pandemic, and President Donald Trump in March issued a proclamation declaring “a National Day of Prayer for All Americans Affected by the Coronavirus Pandemic and for our National Response Efforts.”

Sitt’s announcement came as the seven-day rolling average of new cases in Oklahoma increased from 2,628.9 to 2,838.7 from Nov. 16 through Monday, while the positivity rate rose from 18.3% to 19.2% during the same time period, according to Johns Hopkins University data.

Democratic Louisiana Gov. John Bel Edwards in July called for three days of prayer and fasting shortly after issuing a statewide mask mandate in his state. And in October, Republican Ohio Gov. Mike DeWine, who tested positive, then negative for the virus, issued a proclamation for a Day of Prayer for Trump, first lady Melania Trump “and all those who suffer from and have been affected by the Coronavirus.” The announcement came days after the president and his wife tested positive for the virus.

Stitt has resisted issuing a statewide mask mandate, but has implemented measures including mask mandates in state buildings and closing bars and in-person restaurant service at 11 p.m.

The Oklahoma State Department of Health on Tuesday reported a one-day high of 1,718 hospitalizations and 199,482 total cases since the pandemic began, 1,737 more than Monday.

There have been 1,758 deaths in Oklahoma due to COVID-19, the illness caused by the virus, an increase of 15 from Monday.

The virus’ spread was cited by the NBA’s Oklahoma City Thunder in announcing fans will not be allowed at games at the beginning of the season later this month.

Stitt, who tested positive for the virus in July and previously donated plasma in an effort to help other virus patients recover, made a second plasma donation Tuesday. In the U.S., a federal panel and some leading medical groups have not endorsed convalescent plasma, which the Food and Drug Administration authorized for emergency use, saying there isn’t enough evidence to recommend for or against it.