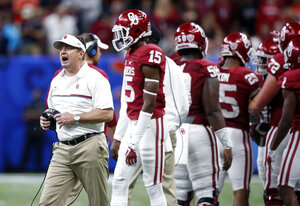 Former Oklahoma coach Bob Stoops is helping coach the Sooners again — at least for now — because of coronavirus issues.

The Sooners had last Saturday’s game at West Virginia postponed, and they temporarily paused organized team activities due to recent positive COVID-19 tests and contact tracing throughout the program. The situation affected the assistant coaches, leading Oklahoma coach Lincoln Riley to ask Stoops for help. Riley said Stoops was on the field helping coach on Tuesday as the 13th-ranked Sooners prepared to host Baylor on Saturday.

“It was great,” Riley said. “It’s nice. It’s been kind of in our hip pocket this whole time. If we had any staff member that fell off, we’ve got a Hall of Famer sitting on the bench. So that’s a pretty good bench when you can call that guy up.”

Stoops, 60, led the Sooners to 10 conference championships and a national title in 18 seasons and had a career record of 190-48 at Oklahoma.

“When Lincoln asked me if I’d be willing to help in a coaching role while he was a little short-handed, I didn’t hesitate to say yes,” Stoops said in a statement. “Certainly, I’m happy to do anything I can to assist the team for however long I’m asked to.”

Stoops was able to jump in immediately because he has remained an institutional staff member since 2017, when he retired as head coach and Riley moved up from offensive coordinator to replace him.

“I always want to lean on him for any observations he has or experience going through different situations,” Riley said.

Stoops came out of retirement to coach the Dallas Renegades of the XFL in 2019, before the league shut down. His son, Drake, is a receiver for the Sooners.

Stoops emphasized that his role would be minimal.

“If I can add some enthusiasm or positive energy for these players — and I do know most of them — that’s a good thing,” Stoops said. “But let’s not get carried away. The people that will influence this game and the rest of our games this season will be coach Riley, his staff and the players. I’m just going to do my best to help out however I can while keeping a low profile.”