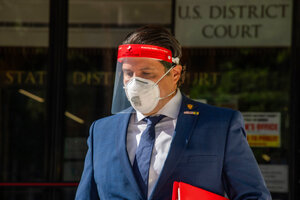 HONOLULU (AP) — A judge sentenced a former Honolulu police lieutenant on Tuesday to three-and-a-half years in prison and a former officer to four-and-a-half years for helping a now-retired police chief and his now-estranged ex-prosecutor wife frame a relative as part of a wide-ranging conspiracy aimed at preserving the couple’s lavish lifestyle.

But former Minh-Hung “Bobby” Nguyen, 46, was more culpable than Hahn, even though he had a lower rank, Seabright said.

Kealoha’s wife, former high-ranking Honolulu prosecutor Katherine Kealoha, was the mastermind behind the scheme to frame her uncle for the theft of the couple’s home mailbox to hide fraud that included stealing from her own grandmother, Seabright said Monday in sentencing her to 13 years in prison.

The plot would not have been possible without Louis Kealoha’s underlings at the Honolulu Police Department, Seabright said, describing Hahn as a soldier carrying out the chief’s requests.

Hahn was a lieutenant in an elite unit of officers hand-picked by Louis Kealoha. He was also Katherine Kealoha’s partner in a solar business.

Nguyen was married to Katherine Kealoha’s niece and had lived in the Kealohas’ pool house.

“It reached the highest levels of government,” leading to the public’s distrust in the police department, the judge said of what’s considered Hawaii’s biggest corruption case.

While the Kealohas were motivated by greed and maintaining their lifestyle, it’s not clear whether Hahn participated out of loyalty or because he thought it would be good for his career, Seabright said.

Nguyen’s attorney, Randall Hironaka, tried to argue that his client played a smaller role because he was a footman who followed orders — and couldn’t question the chief because of his status in the family.

Michael Wheat, a special federal prosecutor, said Nguyen was the only footman in the elite unit because of his family ties: “He’s not just a rank-and-file footman who’s subservient to the chief. He’s family.”

Hahn and Nguyen declined to speak at their separate sentencing hearings.

“You helped the Kealohas carry out their evil scheme of revenge,” Malott told Hahn in court.

Seabright called Nguyen a willing participant in the scheme who arrogantly thought he could get away with it.

A jury previously convicted the Kealohas, Hahn and Nguyen of conspiracy.