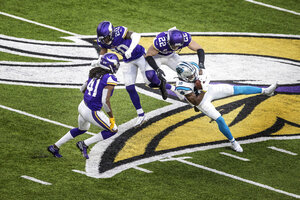 EAGAN, Minn. (AP) — Even without receiver Adam Thielen, the Minnesota Vikings’ offense climbed back from a 21-10 deficit to get within striking distance in the fourth quarter against the Carolina Panthers.

The offense, again, had done its part to keep Minnesota’s faint playoff hopes alive. The Vikings’ comeback, both Sunday and from the season’s 1-5 start, would need a stop from its young, inexperienced defense.

This time, it came through.

Minnesota forced a punt with 2:18 left. Vikings returner Chad Beebe fumbled the punt and Carolina took possession at the 9-yard line with a chance to seal a victory. The Vikings managed to hold again, forcing a field goal for a 27-21 deficit and setting up Kirk Cousins’ game-winning drive in the final two minutes.

“The two turnovers in the third quarter put us in a bad hole, but our team kept fighting and fighting,” Minnesota coach Mike Zimmer said Monday. “Good to see us come back in the last five minutes of the ballgame and have a chance to win. Defensively, we played well most of the entire game. Played really good in the red zone.”

The Vikings held the Panthers without a touchdown on three trips inside the 20-yard line. Eric Kendricks thwarted one attempt with an interception. D.J. Wonnum blocked a field goal, and the Panthers settled for a field goal on the critical possession after the muffed punt.

The victory kept Minnesota (5-6) in the hunt for the postseason, sitting a game behind Arizona for the final wild-card spot.

The Vikings are third in the league in red-zone defense, allowing touchdowns on 51.28% of opponents’ drives inside the 20.

“What we have done is we’ve had really timely turnovers,” safety Harrison Smith said of the team’s sagging turnover-differential. “Red zone interceptions, blocked field goals — that’s not a turnover but it essentially acts as a turnover. So, there’s some big turnovers in those situations, but we definitely need more in all areas.”

“We talked about making a bunch of progress a few weeks ago, and then we had a tough game against the Cowboys, so there’s never like a, ‘We’re finished’ or like, ‘We’re done,’ or ‘We’re good now,’” Smith said. “You just have to stay on top of it and don’t get too high or don’t get too low, just understand that there’s a lot to always be learning no matter how many years you’ve played in the league. It’s not just the young guys. It’s the veterans as well. We have to stay on top of things as well and continue to get better and grow.”

The passing game kept rolling without Thielen, who is tied for second in the NFL with 11 TD catches but is on the restricted/COVID-19 list, and tight end Irv. Smith Jr., who’s sidelined by a groin injury.

Rookie Justin Jefferson seamlessly moved into the No. 1 role, while Beebe, Bisi Johnson and tight end Kyle Rudolph all helped fill the shoes of Thielen and Smith. Jefferson, Beebe, Johnson and Rudolph each had at least seven receptions and 60 yards receiving Sunday.

It marked the second time in NFL history that one team had four receivers reach both thresholds in the same game, joining the 2012 New Orleans Saints.

Special teams. Beebe ended up a hero by catching the winning touchdown and overshadowing his muffed punt. The Vikings’ special teams continue to struggle even during the team’s turnaround. Beebe was filling in for K.J. Osborn, who was inactive.

Minnesota allowed a 20-yard punt return to Pharoah Cooper and had a penalty on another punt.

The veteran Rudolph has largely been an afterthought this season with Cousins focused on Thielen and Jefferson in the passing game, and Smith continuing to emerge as a receiving option. He had seven catches for 68 yards on Sunday, including a pair of receptions for 32 yards on the winning drive.

It was the most yards and receptions Rudolph has had since Dec. 23, 2018, against the Detroit Lions.

For the second straight week, cornerback Kris Boyd was called for a special teams penalty. He had penalties on consecutive plays last week against Dallas, one an illegal shift that negated a first-down catch he had on a fake punt.

A play later, he had an illegal block above the waist penalty while in punt coverage, the same penalty he was called for on Sunday. He also allowed Robby Anderson to get behind him for a 34-yard reception in the fourth quarter.

Minnesota can’t afford the type of letdown it had two weeks ago in a home loss to Dallas. The Vikings host their third straight home game against 1-10 Jacksonville on Sunday.