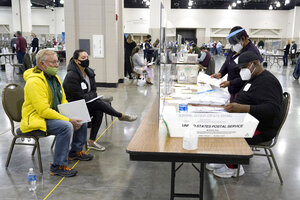 MADISON, Wis. (AP) — Joe Biden’s victory in battleground Wisconsin was certified Monday following a partial recount that only added to his 20,600-vote margin over President Donald Trump, who has promised to file a lawsuit seeking to undo the results.

Gov. Tony Evers, a Democrat, signed a certificate that completed the process after the canvass report showing Biden as the winner following the recount was approved by the chairwoman of the bipartisan Wisconsin Elections Commission. Evers’ signature was required by law and is typically a procedural step that receives little attention.

“Today I carried out my duty to certify the November 3rd election,” Evers said in a statement. “I want to thank our clerks, election administrators, and poll workers across our state for working tirelessly to ensure we had a safe, fair, and efficient election. Thank you for all your good work.”

The action Monday now starts a five-day deadline for Trump to file a lawsuit, which he promised would come no later than Tuesday. Trump is mounting a longshot attempt to overturn the results by disqualifying as many as 238,000 ballots. Trump’s attorneys have alleged without evidence that there was widespread fraud and illegal activity.

Biden’s campaign has said the recount showed that Biden won Wisconsin decisively and there was no fraud. Even if Trump were successful in Wisconsin, the state’s 10 Electoral College votes would not be enough to undo Biden’s overall victory as states around the country certify results. Earlier Monday, Arizona officials certified Biden’s narrow victory in that state.

“There’s no basis at all for any assertion that there was widespread fraud that would have affected the results,” Wisconsin’s Democratic Attorney General Josh Kaul said in a statement Monday. He noted that Trump’s recount targeted only the state’s two most populous counties where the majority of Black people live.

“I have every confidence that this disgraceful Jim Crow strategy for mass disenfranchisement of voters will fail,” Kaul said. “An election isn’t a game of gotcha.”

State law gives the power to confirm the election results to the chair of the bipartisan Wisconsin Elections Commission. The position rotates between Republicans and Democrats and is currently held by Ann Jacobs, a Democrat. She signed the canvass statement certifying Biden as the winner over objections from Republicans who wanted to wait until after legal challenges were exhausted.

Under state law, the elections staff next sent a certificate to Evers to sign and send to the U.S. administrator of general services — a procedural step since the law says the governor “shall sign” it. Evers did so about an hour after the canvassed results were confirmed.

Trump’s legal challenges have failed in other battleground states, including Arizona, Georgia, Michigan, Nevada and Pennsylvania. Two lawsuits from others seeking to disqualify ballots in Wisconsin were filed last week with the Wisconsin Supreme Court, which has not taken action.

Trump paid $3 million for recounts in Dane and Milwaukee counties, the two largest Democratic counties in Wisconsin, but the recount ended up increasing Biden’s lead by 74 votes. Biden won statewide by nearly 20,700 votes.

Trump, during the recount, sought to have ballots discarded where election clerks filled in missing address information on the certification envelope where the ballot is inserted. The state elections commission told clerks before the election that they could fill in missing information on the absentee ballot envelopes, a practice that has been in place for at least the past 11 elections and that no court has ever ruled illegal.

Trump also challenged any absentee ballot where a voter declared themselves to be “indefinitely confined” under the law, a designation that increased from about 57,000 in 2016 to nearly 216,000 this year due to the pandemic. Such a declaration exempts the voter from having to show a photo identification to cast a ballot, which Trump attorney Christ Troupis called “an open invitation for fraud and abuse.” The conservative-controlled Wisconsin Supreme Court this spring ruled that it is up to individual voters to determine whether they are indefinitely confined, in line with guidance from the state elections commission.

Trump also sought to discard any absentee ballot where there was not a written application on file and all absentee ballots cast in-person during the two weeks before Election Day.

People who vote in-person early fill out a certification envelope that they then place their ballot in and that envelope serves as the written record. But the vast majority of absentee requests these days are made online, with a voter’s name entered into an electronic log with no paper record.

Disqualifying all of the ballots in Milwaukee and Dane counties that Trump identified during the recount would result in more than 238,000 votes not counting, according to an analysis by the Milwaukee Journal Sentinel.

The conservative Wisconsin Voters Alliance sued last week seeking to block certification of the results and give the Republican-controlled Legislature the power to appoint presidential electors to cast the state’s 10 Electoral College votes. The Wisconsin Democratic Party previously selected Biden’s 10 electors as prescribed by law. The signing of the canvass statement on Monday confirmed that Biden receives the state’s 10 Electoral College votes from those electors.

Another lawsuit filed over the weekend by Wisconsin resident Dean Mueller argues that ballots placed in drop boxes are illegal and must not be counted.

This story has been corrected to show the recount increased Biden’s margin by 74 votes, not 87, based on corrected totals issued earlier Monday by Dane County.