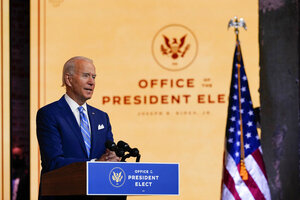 Republican Sen. Lindsey Graham says he thinks President Donald Trump should attend President-elect Joe Biden’s inauguration because it would be “good for the country.”

The South Carolina senator said he spoke with the president over the weekend and encouraged him to pursue his legal challenges to the election results.

Graham said Monday: “He’s going to fight for every vote and push systems to get better and I said, ‘Keep it up.’”

But Graham says after the Electoral College formally confirms Biden as president-elect on Dec. 14, Trump should agree to attend the new president’s inauguration.

“I think it’s good for the country, would be good for him,” Graham said. “We’ll know in December. I hope Biden would come to his.”

HERE’S WHAT YOU NEED TO KNOW ABOUT PRESIDENT-ELECT JOE BIDEN’S TRANSITION TO THE WHITE HOUSE:

President-elect Joe Biden will have an all-female senior communications team at his White House.

— Biden breaks foot while playing with dog, to wear a boot

HERE’S WHAT ELSE IS GOING ON:

President-elect Joe Biden spent Monday at home accepting congratulatory calls from foreign leaders, a day after being diagnosed with stress fractures in his foot.

Biden’s doctor said Sunday evening that the president-elect will likely wear a walking boot for the next several weeks as he recovers from breaking his right foot while playing with one of his dogs.

Joe Biden’s victory in battleground Wisconsin has been confirmed following a partial recount that only added to his 20,600-vote margin over President Donald Trump, who has promised to file a lawsuit seeking to undo the results.

Confirmation of the results by the Democratic chairwoman of the Wisconsin Elections Commission started a five-day window for Trump to file a lawsuit. Trump on Saturday promised to file a lawsuit either Monday or Tuesday, a longshot attempt to overturn the results by disqualifying as many as 238,000 ballots. Trump’s attorneys have alleged without evidence that there was widespread fraud and illegal activity.

Biden’s campaign has said the recount showed that Biden won Wisconsin decisively and there was no fraud. Even if Trump were successful in Wisconsin, the state’s 10 Electoral College votes would not be enough to undo Biden’s overall victory.

Democratic Secretary of State Katie Hobbs and Republican Gov. Doug Ducey stood up for the integrity of the election even as lawyers for Trump were across town Monday arguing without evidence to nine Republican lawmakers that the election was marred by fraud.

Ducey says, “We do elections well here in Arizona. The system is strong.”

The certification also paves the way for Democrat Mark Kelly to take his seat in the U.S. Senate, formalizing his victory in a special election to replace the late John McCain. Kelly is scheduled to be sworn in on Wednesday in Washington.

President-elect Joe Biden is taking the first formal preparations for his Jan. 20 inauguration, unveiling the inaugural committee that will lead arrangements for the day he and Vice President-elect Kamala Harris assume their posts.

The inaugural committee works in coordination with Congress’ planning group around arrangements for the Capitol ceremony, and organizes inaugural balls and other events surrounding the swearing-in. The format of those events is up in the air amid the global coronavirus pandemic, which has surged across the country.

In a statement Monday, the inaugural committee said it will work on “prioritizing keeping people safe and preventing the spread of COVID-19 while engaging all Americans” in the festivities.