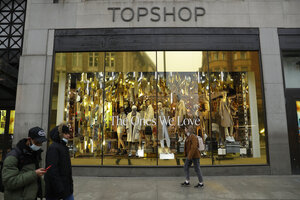 LONDON (AP) — Arcadia Group, the sprawling British retail empire that includes Topshop and has been run by billionaire Philip Green since 2002, was placed into a type of bankruptcy protection on Monday, a move that effectively puts around 13,000 jobs at risk.

In another blow to the country’s retail industry during the coronavirus pandemic, Arcadia said it had called in administrators from Deloitte. The decision protects Arcadia from creditors while a buyer is sought for all or parts of the company.

“The impact of the COVID-19 pandemic, including the forced closure of our stores for prolonged periods, has severely impacted on trading across all of our brands,” said Ian Grabiner, Arcadia’s chief executive.

“Ultimately, however, in the face of the most difficult trading conditions we have ever experienced, the obstacles we encountered were far too severe,” he added.

Arcadia, which also owns other long-established outlets in British town centers such as Burton, Dorothy Perkins and Miss Selfridge, is arguably the biggest British retailing casualty during the pandemic. Others, such as Debenhams, Edinburgh Woollen Mill and Oasis Warehouse have all slid into insolvency since lockdown measures were first imposed in March.

Analysts have said that the pandemic hasn’t been solely behind Arcadia’s woes. For years, Arcadia has struggled to respond to the increased competition from low-cost rivals like Primark, as well as from online disrupters such as ASOS and Boohoo.

Critics have also said that the 68-year-old Green, who has been embroiled in a series of controversies over the past few years, hasn’t invested enough in the businesses to get them in shape to deal with the new competition in retail.

“Arcadia has suffered against these emerging players because the company was slow to develop an innovative and user-friendly online offering as well as a strong brand narrative and social media presence,” said Nina Marston, fashion and luxury analyst at Euromonitor International.

There was no immediate announcement of layoffs or store closures.

“We will be rapidly seeking expressions of interest and expect to identify one or more buyers to ensure the future success of the businesses,” said Matt Smith, joint administrator at Deloitte.

Smith said the intention is that all the brands will continue to trade when stores are allowed to reopen in England on Wednesday.

England is in a four-week lockdown that has forced the closure of all shops selling items deemed to be non-essential. The lockdown expires on Dec. 2 and shops will be allowed to reopen. The other nations of the U.K. — Scotland, Wales and Northern Ireland — have taken slightly different approaches but all have at various stages reimposed restrictions that closed non-essential shops.

For the past couple of decades, Green has been one of the most influential executives in European retailing. He bought Arcadia in 2002 and subsequently came close to taking over Marks & Spencer, too.

His no-nonsense attitude won him admirers and helped his brands to link up with the likes of supermodel Kate Moss and singer Beyonce.

But a series of scandals over the past few years tarnished his reputation and led to calls for him to be stripped of the knighthood that Queen Elizabeth II awarded him in 2006.

For many, his high pay came to symbolize the excesses of the corporate world, especially when his brands were in need of investment. And a slow response to the consumer shift to online shopping meant the brands failed to keep up.

It was after the global financial crisis of 2008 that the underlying problems with his businesses really started to show, especially after his decision to sell BHS, a fixture on British high streets for decades, for just 1 pound to struggling entrepreneur Dominic Chappell.

About a year later, BHS collapsed, costing 11,000 people their jobs and leaving a pension deficit of around 571 million pounds ($760 million). Though Green subsequently paid hundreds of millions into the pension, his reputation never recovered. Chappell, meanwhile, was this month sentenced to six years in jail for tax evasion during his time running BHS.

Jill Lawless contributed to this report.