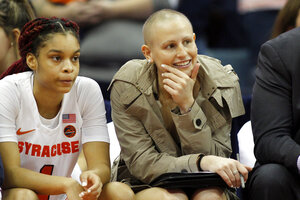 Tiana Mangakahia admits she was emotional on the bus ride to Stony Brook.

Syracuse’s senior guard hadn’t played a competitive game in 615 days after being diagnosed with breast cancer. She missed last season to undergo chemotherapy and then had a double mastectomy last November.

“There was a lot going through my mind,” Mangakahia said after a 50-39 victory over Stony Brook on Sunday. “Especially on the bus. In the warmups, there was less emotions because I was just focused. But on the bus, I was very emotional and I just couldn’t believe that this day was here and I was going to be able to play.”

She had 16 points, seven rebounds, four steals and three assists for the No. 23 Orange. Mangakahia, the school’s all-time assist leader, got involved quickly with a pass to Amaya Finklea-Guity for a layup to open the scoring. A few minutes later, Mangakahia got a steal and scored her first points in almost two years on a fast-break layup.

“It was so nice to be on the court and just to be able to play,” Mangakahia said. “I didn’t expect me to be really amazing, but I wanted that. I just tried my hardest and that’s what I wanted to do.”

Before tipoff, Syracuse coach Quentin Hillsman hugged his star, who was born and raised in Australia.

“I’m just so grateful that she has the opportunity to play again,” Hillsman said. “Some people lose their life and she’s here and playing for us. I’m very thankful and grateful.”

Mangakahia was diagnosed in June 2019 and went through eight rounds of chemotherapy and two operations. She put her WNBA ambitions on hold in April 2019 and chose to return to Syracuse for her final year of eligibility.

Two months later, she discovered a lump that was diagnosed as invasive ductal carcinoma. After undergoing treatment, she was forced to watch last season from the bench because she was not cleared for competition.

She knows she still has to get her stamina back and admitted she wasn’t as fast as she was before the illness. Mangakahia played 36 minutes and shot 4-for-13 from the field, and hit seven of her eight free throw attempts. She also had five turnovers.

“If I was to rate my performance out of 100, I wasn’t extremely happy with how I played, but I’m just glad we got the win,” Mangakahia said. “So I’d probably say like an 85. I just felt super happy to be on the court, and I just wanted to play really good.”

Syracuse will play its home opener on Wednesday.

“I’m really looking forward to it,” she said.