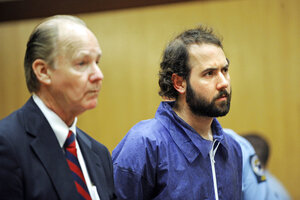 HARTFORD, Conn. (AP) — A Massachusetts man acquitted by reason of insanity of killing a Wesleyan University student in 2009 has filed a lawsuit against Connecticut’s state psychiatric hospital complex, saying an employee improperly told a TV station that he and other patients were allowed to play violent video games.

Stephen Morgan’s lawsuit says he was “emotionally hurt” by the disclosure, and the hospital violated his rights to privacy and to dignified and humane treatment. The suit, filed in Middletown Superior Court on Oct. 28, seeks more than $15,000 in damages and a court order barring the hospital from releasing any other confidential information about him.

The state Department of Mental Health and Addiction Services, which oversees the hospital complex, said in a statement that it cannot comment on pending litigation.

Morgan was charged with murder and other crimes in the May 2009 shooting death of 21-year-old Johanna Justin-Jinich, a college junior from Timnath, Colorado, at a bookstore cafe on Wesleyan’s campus in Middletown. A three judge panel found him not guilty by reason of insanity and committed him to the psychiatric hospital for 60 years.

A forensic psychologist testified that Morgan, 40, from Marblehead, Massachusetts, suffered from paranoid schizophrenia. Prosecutors said Morgan was partially motivated by anti-Semitism as he stalked and harassed the young woman, who was Jewish. He also threatened to harm others on campus, police said.

Morgan’s lawsuit says Tirado’s comments derailed a staff recommendation to transfer Morgan from the maximum-security Whiting to a less restrictive hospital on the campus.

The suit says that when Morgan found out about the TV news report, he was “distressed, stressed, emotionally hurt, suffered emotional pain and suffering, felt stigmatized for his mental health condition, and felt singled out by Nurse Tirado. The breach also fractured the therapeutic alliance he had with his treatment team and made it hard for him to trust the staff.”

State officials have not yet responded in court to the lawsuit. A hearing is set for Dec. 7 on a request by Morgan to seal his name from public view and allow him to use a pseudonym in the lawsuit.