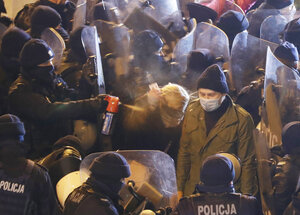 Polish police said Sunday that an officer who sprayed tear gas into the face of a member of parliament during a protest probably did so because he perceived the politician as a threat.

An officer sprayed Barbara Nowacka, a center-left opposition lawmaker, in the face with the gas as she held out her parliamentary identity card to show him Saturday night. The incident occurred during a protest in Warsaw, the capital, against a restrictive abortion ruling.

“I am standing with my lawmaker’s ID and I get pepper spray in my face from a very close distance. I get it in my eyes, in my ear, and the people standing next to me also get hit,” she said on Sunday on TVN24, describing the incident of the night before.

Warsaw police spokesman Sylwester Marczak acknowledged, at first, that the use of pepper spray against a lawmaker showing her ID looked “shocking.”

However, later police published video clips on Twitter of the incident. They said Nowacka had ignored calls to move away from police and they suggested her gesture as she showed her ID to the officer could have seemed threatening.

“A person who, despite calls to move away from the police formation, deliberately continues to approach and suddenly extends a hand with an object in front of the policeman’s face may be perceived as a threat,” police said on Twitter.

Nowacka said that the police were being dishonest and that she posed no threat to the officers.

Nowacka was one of several lawmakers who attended the protest to monitor events after police used force and tear gas against protesters at other recent demonstrations.

She was sprayed as police tried to remove protesters who blocked a major thoroughfare after police prevented them from marching elsewhere in Warsaw. She received medical attention after being sprayed.

The protests over Poland’s new abortion law began when the constitutional court, under the influence of the right-wing ruling party, on Oct. 22 banned abortions of fetuses with congenital defects, tightening an already restrictive law.

Police also published a video that they said showed Marta Lempart, the leader of the Women’s Strike movement, insulting and spitting in the direction of police — while wearing a mask — on Saturday.

She tells the police they should refuse to obey the orders of Jaroslaw Kaczynski, the ruling party leader and a deputy prime minister in charge of security. She calls Kaczynski a “bastard” and asks if there isn’t “one brave (officer) with a gun” among them.

A deputy minister in the government, Jacek Ozdoba, asked prosecutors to investigate her for alleged crimes, including insulting police and risking the health of the police officers by spitting during a pandemic.

“Away from the television cameras, the attitude of these people looks quite different (than peaceful protesters),” police wrote.