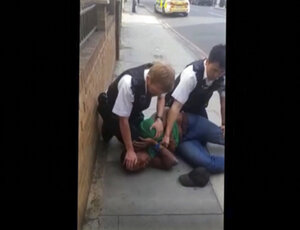 LONDON (AP) — One London police officer was suspended and another given restricted duties Friday after a video of an arrest appeared to show an officer kneeling on a Black man’s neck.

Footage of the arrest in north London on Thursday shows two officers holding down the handcuffed man. At the beginning of the 2 minute and 20 second clip, one of the officers appears to be applying pressure to the man’s neck with his knee. The officer’s hand is on the head of the man, who is on pavement laying on his side.

“Get off me … get off my neck,“ the struggling man can be heard shouting in the video that appeared on social media. “I haven’t done anything wrong, get off my neck.”

One of the two officers asks, “Are you going to behave yourself?” He is told to stay down.

The incident was referred to the Independent Office for Police Conduct, which oversees complaints involving the police forces in England and Wales.

““The video footage that I have seen today and is circulating on social media is extremely disturbing,’’ Metropolitan Police Deputy Commissioner Steve House said. “I understand that many viewing the footage will share my concern.”

The police department said in a statement that the two officers were responding to a report of a fight. The statement said the man was arrested on suspicion of affray and possession of an offensive weapon, and has been seen by a police doctor.

“Some of the techniques used cause me great concern,’’ House said. “They are not taught in police training.″

“I welcome the fact the incident has been reviewed quickly by the Met and it’s right that they have referred it to the IOPC,” Khan said. “I look forward to a swift and thorough independent investigation, with all decisions made public.

Police in many cities are under increased scrutiny following the death of George Floyd following his arrest in Minnesota on May 25. A police officer who held his knee against Floyd’s neck for nearly eight minutes, Derek Chauvin, was charged with second-degree murder.