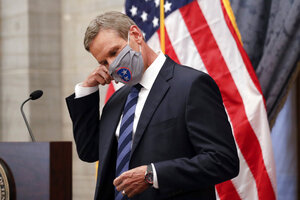 NASHVILLE, Tenn. (AP) — A Tennessee death row inmate received a rare temporary reprieve from Gov. Bill Lee on Friday, after the Republican announced the execution would not take place this year because of the coronavirus — a reason the state’s highest court had previously dismissed as cause to delaying the capital case.

“I am granting Harold Wayne Nichols a temporary reprieve from execution until December 31, 2020, due to the challenges and disruptions caused by the COVID-19 pandemic,” Lee said in a statement.

The governor, who has declined to intervene in the four prior executions during his first term in office, offered no further explanation for his decision.

The 59-year-old Nichols had been scheduled to die by electrocution on Aug. 4. He chose the electric chair over Tennessee’s preferred execution method of lethal injection — an option allowed inmates in the state who were convicted of crimes before January 1999.

Lee’s Friday decision stands in contrast to the state Supreme Court, where justices had already twice declined to delay his execution because of the coronavirus pandemic. Nichols’ attorneys had been looking for a delay in federal court.

According to his attorneys, the coronavirus outbreak had rendered Nichols’ legal team unable to prepare a clemency application for the governor. They also argued Nichols hadn’t been able to sufficiently meet with friends, family, attorneys or his spiritual adviser.

“We are grateful Gov. Lee granted the reprieve,” said Susanne Bales, Nichols’ attorney, in an emailed statement. “Because of the COVID-19 public health crisis Mr. Nichols has been deprived of the type of legal assistance all other Tennessee inmates facing execution receive, as well as the opportunity to practice his religion and prepare for death that is afforded to all others.”

To date, only the courts have rescheduled executions in Tennessee because of the health crisis. Oscar Smith was slated to die in June, but his execution date is now in February 2021, and Byron Black was scheduled to die in October, until his date was reset to April 2021.

“The public health is well-served by not going forward with an execution on August 4; it removes the unnecessary risk of spreading the virus within the prison population and staff, as well as the surrounding community,” Bales added.

Earlier that Friday, Tennessee’s Department of Correction confirmed that only three reporters had applied to witness Nichols’ execution. Typically, up to seven media witnesses are selected in a lottery system with the possibility of two alternates.

Tennessee resumed executions in August 2018 at a pace topped only by Texas. During that time, seven Tennessee inmates have been put to death, with only two selecting lethal injection.

The Volunteer State is one of six in which inmates can choose the electric chair, but it’s the only state that has used the chair in recent years.

Lee has deflected when asked if he’s comfortable with the amount of executions that have continued to ramp up in Tennessee. He has also declined to weigh in when asked about the increased use of the electric chair in those executions. The U.S. Supreme Court has never ruled on whether electrocution violates the 8th Amendment ban on cruel and unusual punishment.

Instead, he has repeatedly said that the death penalty is a legal option in Tennessee and that he is compelled to “abide by the law.”

Nichols was convicted of rape and first-degree felony murder in the 1988 death of 21-year-old Karen Pulley in Hamilton County. Court documents say he raped and hit Pulley on the head several times with a board. She was found alive by her roommates but later died the following day. Nichols was sentenced to death in 1990.

Feb. 20 was the most recent execution in Tennessee, when Nicholas Sutton died in the electric chair.

Reporter Jonathan Mattise contributed to this report from Nashville, Tenn.