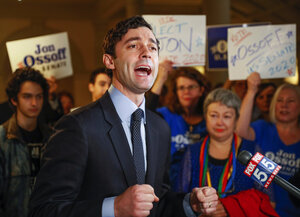 WASHINGTON (AP) — It’s come to this for Republicans straining to defend their Senate majority in November’s elections: They’re air-dropping millions of dollars into races in Alabama, Kentucky and other red states where Donald Trump coasted during his 2016 presidential election triumph.

This year, challenged by Trump’s fumbled handling of the coronavirus pandemic, the crippled economy and his racially inflammatory stances, Republicans face potentially competitive races they’d normally have locked down. Compounding their problems is strong fundraising by Democratic candidates that’s kept them in contention in unlikely locations.

“The president’s weakening poll numbers over the last several months have made down-ballot races more competitive,” said GOP pollster Whit Ayres. While saying he believes Republicans will win many of the contested seats, Ayres added, “It’s fair to say the map is expanded.”

GOP fretting is being aggravated by some polls showing Trump trailing nationally and in some battleground states against Joe Biden, the presumptive Democratic presidential nominee.

And while it’s early and well-known senators can differentiate themselves from an unpopular president atop their ticket, Democrats are defending just 12 Senate seats this November to Republicans’ 23. The GOP controls the Senate 53-47.

“Donald Trump’s failed handling of the coronavirus crisis has changed everything,” said Democratic pollster Geoffrey Garin. He said GOP senators are linked too closely to Trump, leaving him “pleased and surprised by the willingness of so many Republicans to go down with the ship.”

Democrats have at least a puncher’s chance of grabbing Republican-held seats in four states Trump won by double digits: Alaska, Kansas, Kentucky and South Carolina. They have an even shot at ousting GOP Sen. Steve Daines in Montana, which Trump carried by 20 percentage points, and long-shot hopes of retaining their most endangered senator, Doug Jones of Alabama, where Trump won by 28 points.

Republicans say they’ll keep their majority, aided by Trump attacks on Biden that will close the overall gap by Election Day. They argue that Trump’s name on the ballot will give Senate candidates in Republican states a major edge and say they’re spending there because Democrats are raising sums that can’t be ignored.

“The left’s antipathy toward the president becomes an easy rallying cry” for Democratic fundraising, said Steven Law, who leads a pair of outside groups aligned with Senate Majority Leader Mitch McConnell, R-Ky.

“Don’t run away from who you are,” like hedging on whether you’ll vote for Biden, said Heitkamp, a founder of One Country, which advises Democrats on connecting with rural voters. “Run on health care, things that affect your community.”

In early TV spots, the National Republican Senatorial Committee accuses Democratic Senate candidate Jon Ossoff in Georgia of backing “policies so extreme only Hollywood would want him.” One by the Democratic Senatorial Campaign Committee accuses Ernst, the GOP senator from Iowa, of protecting corporate interests, adding, “In tough times it’s important to know who has your back.”

Jones’ $18 million haul in Alabama more than quadruples the amount raised by his Republican opponent, Tommy Tuberville, a former Auburn football coach. That’s prompted One Nation, a group allied with McConnell, to line up $3.2 million on ads helping Tuberville, with the conservative Club for Growth planning $1.3 million more.

In Montana, Daines is on even financial footing with his Democratic opponent, Gov. Steve Bullock. One Nation and the Senate Leadership Fund, another McConnell ally, are spending millions to help Daines, while the DSCC, Senate Democrats’ campaign arm, and Majority Forward, allied with Democratic leadership, are helping Bullock.

The two McConnell-friendly groups are even aiming $15 million at Kentucky to help him fend off an uphill challenge from Democrat Amy McGrath. The $47 million she has raised so far, aided by Democratic contributors’ antipathy to McConnell’s work with Trump, is tops in the country and surpasses McConnell’s $38 million.

Even in Kansas, which hasn’t elected a Democratic senator since before World War II, a group with ties to state and national Republicans plans to spend $3 million to prevent the polarizing Kris Kobach from winning the party’s Senate nomination. Top Republicans fear a Kobach nomination could mean victory for Democrat Barbara Bollier, who’s collected more cash than the three GOP contenders combined.

The two McConnell-allied groups are preparing to spend $22 million to help GOP Sen. David Perdue against Democrat Ossoff in Georgia, where Republican advantages among suburban voters have eroded. An expensive battle is brewing over Ernst’s Iowa seat, with outside Democratic and GOP groups each planning to spend over $20 million.

Other robust Democratic fundraisers include Mark Kelly in Arizona and Jaime Harrison in South Carolina. Kelly has a solid chance of defeating GOP Sen. Martha McSally while Harrison is waging an unlikely drive to oust Republican Sen. Lindsey Graham, a close Trump ally.

Cornyn has a dominant money advantage over MJ Hegar, his Democratic challenger in Texas. While some early polling has shown Biden running well there, Republicans are confident of a Cornyn win, barring a Trump collapse.

Republicans are eyeing Alaska, where GOP Sen. Dan Sullivan’s likely opponent is Al Gross, an independent with Democratic support. The sprawling state is difficult to poll and populated by notoriously free-spirited voters, and Gross, a doctor, has already spent $700,000 of his own money on his campaign.

Scott Kendall, a Republican consultant, predicted Sullivan will win. But, he cautioned, 2020 is “the weirdest year any of us have seen.”