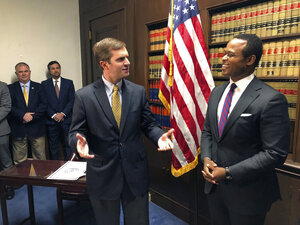 FRANKFORT, Ky. (AP) — Kentucky’s highest court on Friday put a temporary stop to efforts by a top Republican to rein in the Democratic governor’s ability to control the coronavirus outbreak with restrictions on public behavior.

The state Supreme Court stepped into the dispute by halting any lower court orders blocking Gov. Andy Beshear’s executive actions pending its own review. In doing so, the justices preempted a circuit judge who appeared ready to sign an order suspending all of the governor’s COVID-19 orders.

“I’m relieved because I’ve sat up the last two nights not sleeping, worried about how many people would die if we didn’t have any types of rules in place,” Beshear said.

Beshear said that without those restrictions, including a mandate that most people wear masks in public, Kentucky would suffer another proliferation of virus cases — and “more cases means more death.” Cameron says he wears a mask and urges others to do so but has asked a judge to rule on whether the governor’s mask order complies with state law.

To show how the virus can spread, Beshear said an outbreak hitting a football team had infected 18 players, three coaches and 15 other family members. He didn’t identify the team.

Both sides in the legal dispute have expected the issues to ultimately go before the high court.

“Our goal in joining these cases is that the law is followed and the rights of Kentuckians are protected,” Cameron said in a statement. “We look forward to having the Supreme Court take up these important issues in the coming days.”

In its dramatic order, the Supreme Court said two circuit courts could proceed with pandemic-related matters before them and issue “all findings of fact and conclusions of law they find appropriate.” But the high court said “no order, however characterized, shall be effective.”

The Supreme Court said its order will continue pending its review of issues it characterized as of “paramount public importance to all citizens of the commonwealth.”

“Given the need for a clear and consistent statewide public health policy and recognizing that the Kentucky legislature has expressly given the governor broad executive powers in a public health emergency, the court orders a stay of all orders of injunctive relief until such time as the various orders are properly before the court with a full record of any evidence and pleadings considered by the lower courts,” the ruling said.

Beshear, a former attorney general, said the Supreme Court order had “ensured the safety and the lives of Kentuckians, while at the same time saying they’ll hear all the substantive arguments later. And I’m happy to do that.”

Earlier in the day, Cameron indicated that a Boone County circuit judge intended to sign an order blocking all of the governor’s emergency orders. Beshear’s office acknowledged it was bracing for an order that would “void all of the orders the governor has issued to keep us safe.”

Cameron asked for the ruling halting the executive actions. He filed a strongly worded motion accusing Beshear of responding to the pandemic with “unchecked, totalitarian use of emergency authority” in violation of the state’s Constitution.

On Thursday, Beshear denounced the attorney general’s legal maneuver as “just plain irresponsible.” In a social media post, the governor laid out what’s at stake in combating the virus.

“With no rules, there is no chance of getting kids back to school, we will lose over $10 billion in our economy and many Kentuckians will die,” he said on Twitter.

In his own social media post, Cameron said halting the governor’s restrictions would not “hamper the ability of public health officials to ensure the safety and well-being of Kentuckians.”

Public health experts testified at a court hearing on the matter that they “have the tools” needed to fight the virus without executive orders from the governor, the attorney general said.