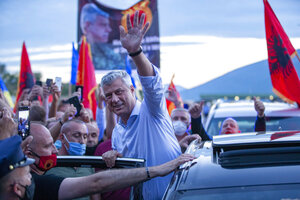 MORINE, Kosovo (AP) — A cheering crowd welcomed Kosovo’s president on Friday upon his return from The Netherlands, where he was questioned by prosecutors at a special international court on alleged crimes during the 1998-1999 war that led to his country’s independence from Serbia.

A visibly moved Thaci spoke briefly to supporters and soon returned to his car, waving. Many cars tried to follow his convoy.

Thaci came by plane to neighboring Albania before driving to Kosovo after four days of questioning at The Hague by prosecutors at the Kosovo Specialist Chambers and Specialist Prosecutor’s Office. The court, which has international staff working under Kosovo’s law, is mandated to look into allegations that KLA members committed war crimes and crimes against humanity.

“I assure you that no one can re-write our history,” Thaci wrote in his Facebook page upon landing at the Albanian capital of Tirana.

Prosecutors have charged him, Kosovo’s former parliamentary speaker Kadri Veseli and others with crimes against humanity and war crimes, including murder, enforced disappearances, persecution and torture. A pretrial judge hasn’t made a decision on whether to proceed with the case.

At the end of questioning on Thursday Thaci told journalists he answered prosecutors with “information about my role, my responsibilities during the war and the period covered by the mandate of the Specialist Court” and denied committing any crimes during the war.

The fighting killed more than 10,000 people — most of them ethnic Albanian civilians — and 1,641 are still unaccounted for. It ended after a 78-day NATO air campaign against Serbian troops.

Kosovo, which is dominated by ethnic Albanians, declared independence from Serbia in 2008, which Belgrade doesn’t recognize.

Thaci will address a rally in Pristina on Saturday.