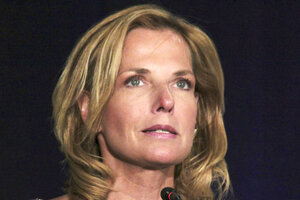 ALBUQUERQUE, N.M. (AP) — The 2030 deadline set by the U.S. government to resume and ramp up production of the plutonium cores used in the nation’s nuclear arsenal is nothing short of challenging, but the head of the National Nuclear Security Administration said Wednesday she’s confident her agency can do it.

Administrator Lisa Gordon-Hagerty spoke with The Associated Press during a stop in New Mexico. The visit coincides with the 75th anniversary of the Trinity Test, which marked the world’s first atomic explosion.

Gordon-Hagerty said much has been learned since 1945 but the fortitude of the agency’s workforce remains as pressure mounts to finish multibillion-dollar construction projects in New Mexico and South Carolina necessary for the plutonium production mission along with extensive training for technicians and other workers.

“That 2030 deadline is a big deal. In 2030, we need to be manufacturing 80 pits per year,” she said. “If we don’t make that, that only means the requirement for more pits will grow and it will cost more money.”

It’s been nearly a decade since the last plutonium cores were made at Los Alamos National Laboratory in northern New Mexico for Navy submarine missiles. The most ever made in one year at the lab was 11.

Gordon-Hagerty said the federal government already has waited too long, noting that many of the plutonium pits that are part of the stockpile date back to the 1970s and 1980s and her agency is responsible to ensuring their safety and reliability.

“Time is not on our side. But that said, we’re not going to hurry anything, we’re going to do it right,” she said.

The work will be split between Los Alamos and the Savannah River Site in South Carolina.

Los Alamos is facing a 2026 deadline to begin producing at least 30 of the plutonium cores a year — a mission that has the support of the most senior Democratic members of New Mexico’s congressional delegation as the work is expected to bring jobs and billions of federal dollars to update buildings or construct new factories.

The effort has drawn much criticism from watchdog groups that long have been concerned about the lab’s safety record, overspent budgets and the pace of cleaning up contamination resulting from decades of bomb-making and nuclear research.

The latest round of funding for the plutonium project is being hashed out now by Congress. Some lawmakers are concerned that the nuclear agency hasn’t developed a master schedule that outlines all the activities related to plutonium pit production.

There also are concerns that the agency doesn’t have contingency plans should it not meet production milestones.

“Given the NNSA’s continuing challenges in constructing large, complex nuclear facilities on time and on budget, coupled with the extremely constrained timeframe and planned use of expedited processes and procedures, the risk of not meeting pit production milestones is high,” states a report by the House Appropriations Committee.

The report notes that similar concerns were included in a 2019 independent assessment indicating there were no options that would result in 80 pits being made per year by 2030.

Gordon-Hagerty acknowledged past delays but said Wednesday that things are being done differently now and that 90% of a construction project is designed before shovels ever hit the dirt. The designs also are modular, meaning they can be adapted for future needs, she said.

Gordon-Hagerty will travel to Los Alamos on Thursday, where she will mark the Trinity anniversary with an event at the historic V-Site, where early testing and some assembly of the atomic bomb took place as part of the top secret Manhattan Project.