Giroux’s 4-point night leads Flyers past Canes, 5-3
Listen to KDWN on Your Amazon Echo Device. Here’s How: You can now keep up with all your favorite KDWN Talk shows (Kilmeade, The Vegas Take, Hannity, Levin, The Steve Sanchez Show, Sports X Radio)… 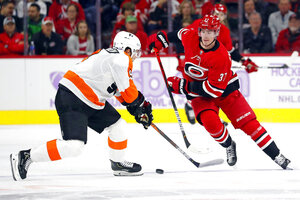 RALEIGH, N.C. (AP) — Claude Giroux and Morgan Frost have only been playing together for a few days. The Philadelphia Flyers might want to keep them together for a while.

Giroux had two goals and two assists and Frost, his young linemate, had a goal and an assist in his second NHL game, leading the Flyers past the Carolina Hurricanes 5-3 on Thursday night.

“It’s been only two games, but any time you get chemistry with someone that quick, usually it’s going to go well,” Giroux said. “I think it’s important we build on this — as a line, and as a team.”

Carolina had won four in a row. Lucas Wallmark tied it at 3 at 3:24 of the third period, Teuvo Teravainen had a goal and an assist 80 seconds apart in the first, and Sebastian Aho also scored.

“We were sluggish most of that game,” Carolina coach Rod Brind’Amour said. “We got going in spurts, but we were never able to get footing. It’s a frustrating game, because you’re going to give up some goals, but we felt like, way too easy on the goals. That’s the game.”

Brian Elliott made 33 saves for Philadelphia while Petr Mrazek stopped 18 shots for Carolina.

The Flyers’ line of Giroux, Frost and Konecny played a part in the first four goals. None was bigger than the tiebreaking play, with Frost slipping an across-the-crease pass to Giroux, who tapped it in with 8:44 remaining.

“I saw (Giroux) and no one really pressured me at first,” Frost said. “Instead of wrapping it, I kind of held on to it and the play opened up and he was open.”

Elliott shut the Hurricanes down after that, stopping Nino Niederreiter from point-blank range with his pad with about 2½ minutes left and then keeping the puck out amid a scrum in front of the net with 1:15 remaining.

Carolina’s fourth line generated the tying goal early in the third, with Wallmark scoring off a slick behind-the-back pass from Brock McGinn.

That rally came in response to Philadelphia digging out of an early two-goal deficit and taking a 3-2 lead at 2:51 of the second when Frost snapped a shot past Mrazek off a pass from Giroux — who also scored the Flyers’ first goal on a 4-on-4, and assisted on Provorov’s tying shot from the point.

“My two goals, I didn’t really do much — just kind of pushed the puck in the net,” Giroux said. “They’re two great players, they make some special plays and I’ll definitely take it.”

The Hurricanes jumped on the Flyers early, with Teravainen a factor in both goals in the opening 5 minutes. His pass from the boards set up Aho’s shot from the slot that trickled between Elliott’s pads at 3:23, and Teravainen made it 2-0 with his shot from the circle at 4:43, giving him 18 points in 17 career games against the Flyers.

NOTES: Philadelphia leads the season series 2-0. … Carolina RW Andrei Svechnikov, who had the primary assist on Teravainen’s goal, has points in six straight games. … Carolina D Joel Edmundson received a 10-minute misconduct in addition to his slashing minor at 12:19 of the first. … Philadelphia C Sean Couturier, at 26 years and 249 days old, became the youngest Flyer to appear in 600 games with the team.