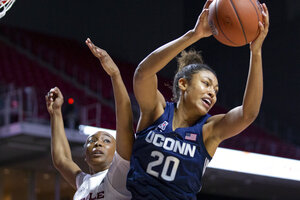 PHILADELPHIA (AP) — Geno Auriemma knows his team is a work in progress, likening it to a jazz band.

On Sunday, the fourth-ranked Huskies were in tune for most of the game in an 83-54 win over Temple.

“When we all blend together we make great music. Now it’s like we’re all tuning up our instruments,” Auriemma said. “When it’s going good, it’s good.”

The Huskies continued to struggle at times on offense, but they were fewer than in the first two games of the season.

“Today we were able to play through some of the lulls that we had. First quarter was great, second quarter not-so great,” Auriemma said. “Third quarter, not-so great. The fourth quarter we were really good. We had stretches today we were better than at any time in the other games we played.”

Olivia Nelson-Ododa had a career-high 15 points, 10 rebounds and five blocks to lead UConn in the American Athletic Conference opener for both teams.

“Today she was damn good. She had 14 offensive rebounds in our last two games. That’s 14 possessions we didn’t have that we got,” Auriemma said. “Altered a lot of shots, blocked a lot of shots. Made a couple shots from the perimeter. Today she looked like the player I wanted her to look like. Concerted effort to be more active.”

The game was being played so early in the schedule because UConn has four non-conference games against No. 1 Oregon, No. 2 Baylor, No. 6 South Carolina and Tennessee after Jan. 1 as well as an exhibition game against the U.S. national team on Jan.27. That made finding dates to play during the normal part of the conference schedule difficult.

Temple (3-2) was able to get within 10 in the third quarter to put some pressure on the Huskies, but UConn opened the fourth with a 15-2 run — including a nifty spin move for a layup by Williams — to put the game away.

It took three games, but UConn freshman Anna Makurat finally has a basket. She was 0-for-6 coming into the game and missed her first six shots on Sunday before hitting a backdoor layup with 6:30 left in the third quarter. Even though she hasn’t been shooting well, she’s been doing other things. The guard from Poland had seven assists to go along with her two points.

“She had seven assists, five last game and five game before that which is really good,” Auriemma said. “You know how some people are 0-for the game and 0-for the week. She’s 0-for America. She hadn’t made a shot since she’s been in this country. She’s a good player. Just can’t make any shots.”

UConn is 105-0 in the American Athletic in regular-season play and 121-0 overall in the conference the Huskies are leaving at the end of the season. … The Huskies have won the past 14 meetings between the two schools after dropping the first two. This will be the lone game between the teams in the regular season . … Huskies senior Kyla Irwin had about 30 family and friends in attendance sitting at center court wearing “Kyla” shirts. She’s from State College, Pennsylvania, about a three-hour drive from Philadelphia. She checked in for the first time with 5:10 left in the game to a huge ovation from the group and scored a layup a few minutes later. She also added a jumper and a 3-pointer. … With a jumper in the third quarter Davis became the 25th player in Temple history to reach 1,000 points.