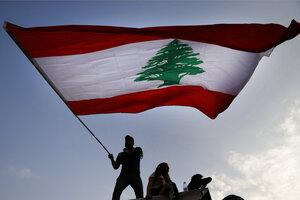 BEIRUT (AP) — Lebanese bankers and government officials tried to calm a worried public Saturday amid the country’s major financial crisis, telling them that all deposits are guaranteed and “there is no need for panic.”

The country’s financial troubles have worsened since nationwide protests — initially against new taxes — snowballed into calls for the entire political elite to step down. Banks reopened Nov. 1 after a two-week closure amid the protests. But depositors have rushed to withdraw their money in recent days, while the country’s various lenders have imposed varying capital controls that differ from bank to bank.

The announcement by Salim Sfeir, chairman of the Association of Banks in Lebanon, came after a two-hour meeting between President Michel Aoun, several Cabinet ministers and top banking officials in search of solutions for Lebanon’s deepening financial and economic crisis.

“Depositors’ money is being preserved. What is happening is not an issue related to solvency, and therefore there is no need for panic,” Sfeir said. “People should calm down. People should withdraw enough to meet their needs, not everything they have.”

Sfeir added that those who attended the meeting have asked the central bank’s governor, Riad Salameh, to continue taking the necessary measures “to preserve the safety of cash and economic stability.” He added that small depositors will be given priority when they come to withdraw money.

Aoun’s office said the meeting was attended by the ministers of economy and finance, as well as the central bank governor, the head of the banks’ association and top officials from the country’s largest lenders.

Lebanon, one of the most heavily indebted countries in the world, was already dealing with a severe fiscal crisis before the protests began, one rooted in years of heavy borrowing and expensive patronage networks run by entrenched political parties. The Lebanese pound is trading at up to 1,900 to the dollar on the black market, a devaluation of nearly to 30% from the official rate.

Banks in Lebanon were closed Saturday for an extra day amid deepening turmoil and public anxiety over liquidity. Monday is a holiday to mark the Prophet Muhammad’s birthday, and banks are scheduled to resume normal work on Tuesday.

The financial crisis has worsened since Prime Minister Saad Hariri resigned his government on Oct. 29, meeting a key demand by the protesters. No date has been yet set by Aoun for consultations with heads of parliamentary blocs to name a new premier.

Protesters are demanding a government made up of technocrats that would immediately get to work on the necessary reforms to address the economy. Politicians are divided among other things over whether the new Cabinet should be made up of experts only or include politicians.

The World Bank on Friday urged Lebanon to form a new Cabinet “within a week” to prevent further degradation and loss of confidence in its economy, warning of grave risks to the country’s stability.