No. 1 Clemson's trip to Syracuse headlines ACC weekend
Listen to KDWN on Your Amazon Echo Device. Here’s How: You can now keep up with all your favorite KDWN Talk shows (Kilmeade, The Vegas Take, Hannity, Levin, The Steve Sanchez Show, Sports X Radio)… 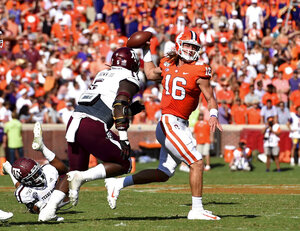 Here are things to watch in the Atlantic Coast Conference in Week 3:

GAME OF THE WEEK

No. 1 Clemson at Syracuse. This one might’ve had a bit more juice a week ago, but the Tigers’ trip to the Carrier Dome still stacks up as the best game of a weekend in which four ACC teams face off against FCS schools. Syracuse (1-1) remains the last ACC team to beat Clemson (2-0), knocking off the Tigers two years ago in their last visit north after an injury to QB Kelly Bryant . The rematch might have been the nation’s biggest game, had the Orange not been blown out by Maryland last week.

North Carolina State’s defense vs. West Virginia’s offense. New N.C. State co-defensive coordinator Tony Gibson served two lengthy stints on the Mountaineers’ staff and interviewed for the head coaching job that ultimately went to Neal Brown after Dana Holgorsen left for Houston. Now he’s in charge of a Wolfpack defense that has yet to allow a touchdown and is giving up 24.5 yards rushing per game. That could mean trouble for a West Virginia ground game that ranks 129th nationally (32 ypg) and was at minus-7 yards rushing in the second half of a blowout loss at Missouri.

Only three teams in the Bowl Subdivision have two victories over Power 5 schools and two of them are in the ACC. Clemson opened with wins over Georgia Tech and Texas A&M, and North Carolina owns victories over South Carolina and Miami. The third member of that club is Hawaii, which is 2-0 against the Pac-12 after beating Arizona and Oregon State.

Maybe Pittsburgh can put a scare into an instate rival in their last scheduled meeting. The Panthers are 17-point underdogs at No. 13 Penn State in the finale of their four-game series. Pitt has once again gone into lockdown mode, with coach Pat Narduzzi declining to make any players available to the media this week. The Panthers will have to find a way to continue Penn State’s struggles in the ground game after the Nittany Lions managed just 78 yards rushing against Buffalo.

Bryce Perkins could be in for a big game. The Virginia quarterback might be the conference’s most exciting player — at least among those who don’t play for Clemson — and he’s going up against a Florida State defense that ranks last in the league overall (520 ypg) and in points allowed (40 ppg). Perkins, who set a school record with 3,603 total yards a year ago, is slightly off that pace with 485 through two games for the 25th-ranked Cavaliers.