Canada scores 26, Storm eliminate Lynx 84-74
Listen to KDWN on Your Amazon Echo Device. Here’s How: You can now keep up with all your favorite KDWN Talk shows (Kilmeade, The Vegas Take, Hannity, Levin, The Steve Sanchez Show, Sports X Radio)… 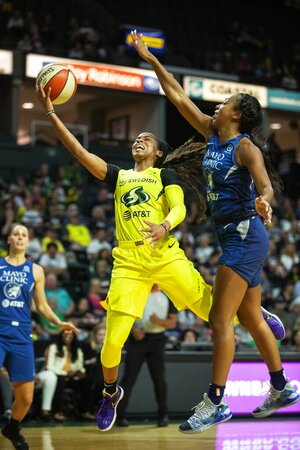 With Jewell Loyd adding 22 points, the No. 6 Storm, who play at third-seeded Los Angeles on Sunday in the single-elimination second round, got 48 out of their backcourt. Minnesota had one point from starting guards Odyssey Sims and Danielle Robinson. Mercedes Russell contributed 13 points for Seattle.

Sylvia Fowles scored inside with 5:52 to play in the fourth quarter to pull Minnesota within 71-67. The Lynx then went nine straight possessions without scoring. By the time Napheesa Collier made a free throw with 1:11 to play, Seattle was up 76-68.

Damiris Dantas led the Lynx with 20 points, Collier had 19 and Fowles 11. Fowles also had 11 rebounds and Collier 10. According to Elias Sports Bureau, Collier is the third rookie in WNBA history to produce a double-double in their playoff debut, joining Candace Parker and Tamika Catchings.

Seattle led 29-21 after one quarter as Canada and Loyd scored 11 points each. Minnesota stayed close because of its frontcourt production but never led after the opening minutes.

Trailing 64-59 entering the fourth quarter, Minnesota got an early basket but Seattle reserves Shavonte Zellous and Sami Whitcomb combined for seven points to push the lead to 10. The Lynx answered with six points but then went cold with six turnovers and four missed shots before Dantas hit a 3 in the final minute.