AP PHOTOS: Moroccans feast, light up sky on Shiite holy day
Listen to KDWN on Your Amazon Echo Device. Here’s How: You can now keep up with all your favorite KDWN Talk shows (Kilmeade, The Vegas Take, Hannity, Levin, The Steve Sanchez Show, Sports X Radio)… 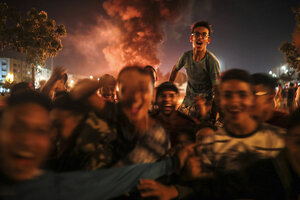 The holy day observed this week commemorates the death of Imam Hussein, the grandson of the Prophet Muhammad. While he was one of Shiite Islam’s most important figures, the holiday is also marked in some largely Sunni countries like Morocco.

In most places, Ashoura is an emotional time in remembrance of the historic events that led to Hussein’s death. Hussein’s killing has been attributed with cementing the schism between Shiite and Sunni Islam.

While in countries such as Iraq believers weep over his death or beat their own backs with chains, in Morocco, religious and cultural traditions give the day a unique celebratory atmosphere.

Families gather at home to eat a variety of sweets, dried fruits, and pastries that are served up throughout the Ashoura week. Traditional couscous meals with meat and vegetables are cooked, as women sing songs that are chanted to the beat of newly-bought Taarejs, colorful drums which are given as gifts to children. Girls get traditional henna tattoos for the occasion.

The rituals don’t end there.

As night falls, people spill out onto the streets. Children light sparklers and ask for treats, in an atmosphere reminiscent of Halloween.

Crowds of youths in cities like Sale on the Atlantic Coast ignite flares and fireworks — despite an annual crackdown on sales by authorities in an effort to reduce the risk of accidents.

In open spaces, young people drag tires and light them up, as residents gather to watch a huge bonfire blaze under the night sky.