Former Indian Finance Minister Arun Jaitley dies at 66
Good Advice From The CDC: While the immediate risk of this new virus to the American public is still believed to be low at this time, everyone can do their part to help respond to this emerging health threat. 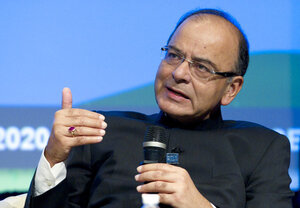 The All India Institute of Medical Sciences announced Jaitley’s death in a statement, but did not give any details. He was admitted to the hospital two weeks ago after he complained of breathlessness and restlessness.

Jaitley held the finance portfolio in Modi’s Hindu nationalist-led government from 2014 through this year but chose not to run for reelection because of poor health.

Jaitley was diabetic and had bariatric — weight-loss surgery — in 2014, received a kidney transplant in 2018 and traveled to the United States last January for unspecified medical care.

He is survived by his wife, son and daughter.

Modi said on Twitter that Jaitley “was a political giant, towering intellectual and legal luminary. He was an articulate leader who made a lasting contribution to India.”

Indian President Ram Nath Kovind said he was extremely saddened by the news. “A brilliant lawyer, a seasoned parliamentarian, and a distinguished minister, he contributed immensely to nation building,” he tweeted.

A lawyer who first got involved in politics as a student leader at Delhi University in the 1970s, Jaitley also served as a minister in the Bharatiya Janata Party government led by then-Prime Minister Atal Behari Vajpayee from 1999 to 2003.

In Modi’s government, Jaitley held the portfolios of finance, defense and corporate affairs. In Vajpayee’s government, he controlled information and broadcasting, as well as disinvestment, and later also law and justice and company affairs.

From 2009 to 2014, he served as leader of the opposition in India’s upper house of Parliament.

Jaitley loyally carried out some of Modi’s more controversial economic initiatives, including tax and welfare reforms and overnight demonetization — which took 86% of cash out of circulation, leaving hundreds of millions of people temporarily without funds.

Early this year, Jaitley authored an interim federal budget with a string of populist giveaways, from affordable housing to a health plan for millions of poor people, in an attempt to woo voters ahead of last spring’s election. As he fell sick, the budget was presented to Parliament by acting Finance Minister Piyush Goyal in February.

India’s stock market took a hit after Jaitley announced a 10% tax on some long-term capital gains, saying stock market returns were “quite attractive and it was time to bring them under the ambit of capital gains tax.”

Though India was the world’s fastest-growing economy in 2018, it has started to lose steam. The Department of Economic Affairs reported that economic growth slowed in 2018-2019, to under 7% in the most recent quarter from 8% in mid-2018, hobbled by consumer demand, weak growth in investment and drooping exports.