Malaysia bans Indian Muslim preacher from public activities
Good Advice From The CDC: While the immediate risk of this new virus to the American public is still believed to be low at this time, everyone can do their part to help respond to this emerging health threat. 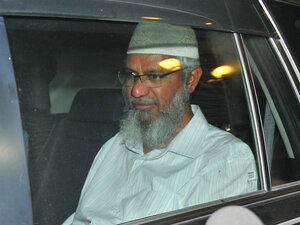 Zakir Naik was grilled a second time by police on Monday for 10 hours after they received more than 100 complaints over remarks he made questioning the loyalty of minority Hindus and saying that ethnic Chinese are guests in Malaysia.

Police spokesman Asmawati Ahmad said all public activities involving Zakir are banned to “avoid any controversy and hostility, and the potential to cause a tense atmosphere” in the multiethnic country.

She said police will advise all parties organizing public talks involving Zakir to halt the events.

Race is a sensitive issue in Malaysia, where ethnic Malay Muslims make up about two-thirds of its 32 million people, with large Chinese and Indian minorities.

The government has been reluctant to deport Zakir, citing concerns for his safety, but Prime Minister Mahathir Mohamad said over the weekend that Zakir overstepped his boundaries and action will be taken based on police investigations.

Zakir, 53, is an Islamic evangelist who has lived in Malaysia since he was granted permanent residency status in 2016. He has previously been banned from speaking in the United Kingdom, Canada and Bangladesh for his hard-line religious views.

He founded a satellite television channel, Peace TV, in 2006 that is broadcast from Dubai and claims to have more than 200 million viewers worldwide. The channel was banned in India and Bangladesh in 2016 for allegedly inspiring a terror attack in Dhaka that killed 22 people.

Zakir said Tuesday that his words had been taken out of context by his detractors and apologized for the misunderstanding. He said he was against racism, calling it “evil.”