Lebanon lawmakers ratify austerity budget to address a slump
Listen to KDWN on Your Amazon Echo Device. Here’s How: You can now keep up with all your favorite KDWN Talk shows (Kilmeade, The Vegas Take, Hannity, Levin, The Steve Sanchez Show, Sports X Radio)… 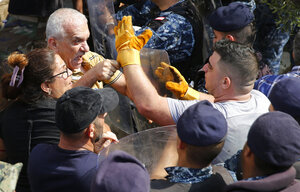 Critics said the budget didn’t tackle structural problems of the economy or target corruption. Instead, protesters and opponents said it focused on cutting expenditures and raising taxes that transfers the cost to the average citizen.

“For sure our expectations are higher but this is a beginning for reform,” said Prime Minister Saad Hariri after the vote ended late Friday. He said he expected more reform in the coming two years to fix the current economic slump.

“I understand the protests and why they raise their voices. But we are trying to do the impossible in a very difficult situation.”

Lebanon has one of the world’s highest public debts in the world, standing at 150% of GDP. Growth has plummeted and budget deficit reached 11% of GDP as economic activities slowed down and remittances of Lebanese living abroad shrank.

Hariri commended political rivals who worked together in the coalition government and parliament to take unpopular measures.

The budget was passed by a majority in the 128-member parliament. The National News Agency said 83 lawmakers voted for it and 18 against it. It is not clear if the other 27 lawmakers abstained or were absent from the session.

Protesters had rallied against the proposed budget for weeks as it was discussed in parliament and in the government. On Friday, protesters, mostly army veterans, broke through a security cordon outside parliament, raising the tension at the last minute as lawmakers were voting on each article of the bill.

The protesters pushed past barricades, walking over them and making their way closer to the heavily guarded parliament building. Some protesters scuffled with security forces but soldiers were deployed to separate between them. The protesters have gathered every day since Tuesday as lawmakers met for final discussion on the budget ahead of a vote.

Army veterans feared the proposed measures cut deep into their pensions and benefits. They say those who sacrificed their lives for the country should not be targeted with austerity measures.

“Thieves! Thieves!” the angry protesters shouting, addressing government officials. Many of them are also lawmakers, whom they accuse of corruption.

Bou Saab said a compromise was reached to ensure that new taxes will only affect their basic income, not benefits, and will affect mostly senior officers not soldiers. He said taxes on medical services were also reduced by half in negotiations.

“I don’t want them to be disappointed or feel this is only affecting the army,” Bou Saab said. The protesters broke up their strike vowing to challenge the budget in court.

The budget was approved by the government in late May before being sent to parliament.