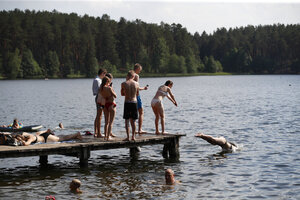 The nation of 2.8 million hasn’t seen rain for many weeks and a new June all-time heat record of 35.7 degrees Celsius (96 F) was reached in the central Lithuanian city of Kaisiadorys on Wednesday, when six people drowned in rivers and lakes. Average daily temperature has remained above 31 Celsius for more than a week.

Meteorologists said Thursday that temperatures were expected to hit 36 C in several regions on Thursday.

Extreme heat has led rivers and creeks to reach their lowest levers ever recorded for June and water supply to many households in major cities has been limited. Schools were closed in many cities this week.