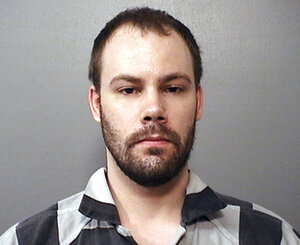 PEORIA, Ill. (AP) — The Latest on the federal death-penalty trial of a former University of Illinois graduate student charged with kidnapping and killing a visiting Chinese scholar(all times local):

The attorney for a former University of Illinois doctoral student has told jurors that the defense is admitting that their client kidnapped and killed a visiting Chinese scholar in 2017.

George Tesseff said in his opening statement Wednesday that he realized it was exceptional for a defense attorney to say his client committed the crime.

But he said that 29-year-old Brendt Christensen was “on trial for his life,” alluding to the possibility of a death sentence if he is found guilty of kidnapping and killing 26-year-old Yingying Zhang.

While the defense agreed Christensen kidnapped and killed Zhang, Tesseff said they took issue with prosecutors’ explanation of “how and why.”

Defense teams in death penalty trials often have the goal of ensuring their client doesn’t get the death penalty and so their focus is on that and not on winning a not-guilty verdict.

A federal prosecutor has shared with jurors grisly details of how they claim a former University of Illinois doctoral student kidnapped a visiting scholar from China, then brutally beat and killed her.

Opening statements began Wednesday in the federal death-penalty trial of Brendt Christensen. Christensen is accused of luring 26-gear-old Yingying Zhang (ying ying zahng) into his car in June, 2017 as she headed to sign a lease off campus.

Prosecutors told jurors Wednesday that Christensen took Zhang to his apartment where he raped, choked and stabbed her in his bedroom. They said Christensen later pummeled her in the head with a baseball bat in his bathroom before decapitating her.

The case is being closely watched by Chinese students across the U.S. The University of Illinois has more than 5,000 Chinese students, among the largest such enrollments in the nation.

Opening statements are set for a federal death-penalty trial of a former University of Illinois graduate student charged with kidnapping and killing a visiting Chinese scholar.

After opening remarks to jurors Wednesday morning in Peoria, in central Illinois, federal prosecutors will call their first witnesses. Twelve jurors were picked Tuesday after a jury-selection process that last more than a week.

Brendt Christensen is accused of luring 26-gear-old Yingying Zhang into his car in June 2017 as she headed to sign a lease off campus.

A federal judge moved the trial to Peoria after Christensen’s lawyers said pretrial publicity would have made it impossible for the 29-year-old to get a fair trial in the Champaign area, where U of I is located.