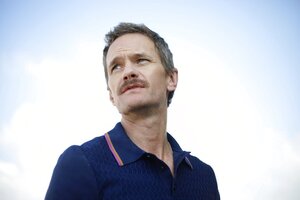 TEL AVIV, Israel (AP) — This year’s official international ambassador to Tel Aviv’s Gay Pride Parade says he has no interest in being a gay icon.

TV star Neil Patrick Harris arrived in Israel Wednesday along with his husband, the chef and actor David Burtka, to headline Tel Aviv’s annual celebration of its famous gay-friendly scene.

But Harris, who has two children via surrogacy and is involved in various gay-affiliated advocacy groups, says he hardly considers himself a symbol of the community.

“I’m just a guy who is married to another guy and we have kids and we live our lives I would say as ‘normally’ as one would. But I think normal is a very subjective term, especially in the gay community,” he told The Associated Press. “I legitimately have no interest in being a representative or an ambassador for anything except my kids.”

Tel Aviv’s Gay Pride Parade is the biggest event of its kind in the region, typically drawing some 250,000 people from Israel and around the world annually to the colorful beachside march and party.

Israel has emerged as one of the world’s most gay-friendly travel destinations in recent years, with Tel Aviv in particular noted for its gay-friendly lifestyle, in sharp contrast to the rest of the Middle East where gay culture is often not tolerated or persecuted.

In Israel, homosexuals serve openly in the military and in parliament and many popular artists and entertainers are gay. Last week, Prime Minister Benjamin Netanyahu appointed his ally Amir Ohana as justice minister, making him the country’s first openly gay Cabinet minister.

Among Palestinians, homosexuals tend to be secretive about their social lives and some have crossed into Israel to live safely. However, some critics have also accused Israel of “pinkwashing,” or using its tolerance for gay culture to deflect criticism of harsh policies toward the Palestinians.

Harris, in his first visit to the region, refused to wade into those murky waters, saying he knew very little of the local scene. In fact, he said the parade would be the first one in which he’s ever taken part. He said he has only watched one before in Berlin, where he was impressed with how it “was so joyous and jubilant and filled with so many people expressing themselves and it was just infectious love.”

Harris, who rose to fame as a child actor playing the title character in the medical drama Doogie Howser M.D., came out publicly in 2006 while starring as the notorious womanizer Barney Stinson in the popular comedy TV show “How I Met Your Mother.”

He also famously played a fictionalized version of himself in the Harold & Kumar movies, in which he perpetuates his oversexed, drug-addicted alter ego, with the character even insinuating that “Neil Patrick Harris” was just pretending to be gay so he could trick women into having sex with him.

“I was the antithesis of who you would have expected,” he said. “It was just the disaster rock-and-roll version of NPH,” he said, referring to himself by his initials.

From the balcony of a luxury hotel in Jaffa overlooking the route of the planned parade route, Harris said he appreciates the great gains that gays have made.

He noted that his visit coincides with the 50th anniversary of the Stonewall riots in New York City, widely regarding as the opening salvo in the fight for LGBTQ rights in the United States.

“It’s nice to appreciate where we’ve come from,” he said. “I’m very grateful that I live in a time and in a world where the needle has moved a lot because of others and I’m happy to promote the positivity of it all.”