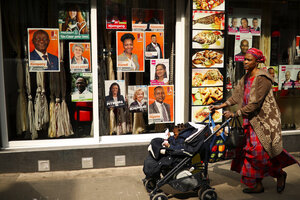 BRUSSELS (AP) — While all EU member countries go to the polls this week, Belgians on Sunday are also voting in a general election, looking to end months of political limbo sparked after the biggest party in the governing coalition quit over Prime Minister Charles Michel’s support for the U.N. migration pact.

Michel has steered a caretaker government doing only day-to-day business since December, but with the country’s 8 million voters choosing from more than a dozen parties, chances are that it will prove difficult to quickly form a stable coalition.

The Flemish N-VA party takes a hard line on migrants and pulled out of government after Michel sought parliamentary approval for the U.N. Global Compact against its wishes. The N-VA branded the remnants of his government “the Marrakech coalition,” after the city where the migration treaty was adopted.

The N-VA has been campaigning hard ahead of election day — Belgium is also holding a regional poll on Sunday — and surveys suggest the party may simply be too big for any future government to avoid.

In a sign of the size of the challenge, Michel has even left his door open to working with the party again, telling broadcaster RTL Thursday: “I don’t intend to rule out anything that will make the country ungovernable.”

But when is Belgium likely to have a government?

Belgium is renowned for its culinary fare and surrealist art — “I have to admit, it is easy to love a country famous for chocolate and beer,” former U.S. president Barack Obama said during a visit in 2014 — but if there’s one thing the kingdom is infamous for, it is politics.

After elections in 2010, Belgium set a world record of 589 days without a government, almost doubling the previous record set by conflict-torn Iraq. After the last polls, in 2014, parties haggled for four months before a coalition was agreed.

Analysts warn that the same thing is likely this time, meaning Belgium — where voting is compulsory — might spend most of this year without a fully functioning government.

The root of the problem is the divide between the richer, Flemish-speaking north of the country, where about 60 percent of the population lives, and the somewhat poorer French-language region of Wallonia. Belgium also has a small German-language community.

Parties align themselves in terms of language and community, making it exceedingly difficult to form clear majorities in parliament and simple coalitions with a balance of community representation in government.

The Greens, a relatively small party, are expected to be bolstered, given several climate change rallies this year, and could play a kingmaker role, even though the Flemish nationalists and Walloon Socialists appear set to win the most seats.

European fears of a rise of far-right and populist parties are unlikely to arise in Belgium. Surveys suggest Vlaams Belang will make ground in Flanders, although will remain a relatively small party, but the far-right is virtually non-existent in Wallonia.