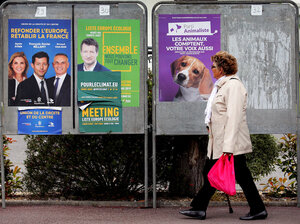 THE HAGUE, Netherlands (AP) — The Latest on the European Parliament elections (all times local):

An exit poll published by Dutch national broadcaster NOS shows that the Labor Party has won the most seats in the Netherland’s European Parliament election, which delivered a fractured result.

The exit poll for national broadcaster NOS asked voters at 35 polling booths across the country to repeat their votes on a shadow ballot. The results were extrapolated to give the nationwide picture with a margin of error of one seat.

The European Parliament candidate who coined the term “the great replacement” has disavowed the list he heads after a photo turned up of his No. 2 candidate kneeling before a swastika drawn in the sand.

Rules don’t allow France’s Renaud Camus to withdraw his list but he tweeted on Thursday that he “dissociates” himself from it.

Twenty-year-old Fiorina Lignier — who lost an eye in a yellow vest demonstration — said in a video posted on Twitter that she was 18 and a student at the time of her “screw-up.” She said she wouldn’t take her parliamentary seat if elected.

Conservative Catholic Karim Ouchikh, the No. 3, took over the campaign.

Camus’ campaign has drawn attention in France with his chilling notion that immigrants are replacing Europeans and must be returned to their homelands.

Two polling stations in southwest London have been closed because of the discovery of an unexploded World War II bomb at a nearby building site.

Police closed off the area after the bomb was found Thursday morning in Kingston. Several universities and high schools in the area were also evacuated as a precaution.

Voters at the two polling stations were directed to other sites to cast ballots in the elections for the European Parliament.

Police asked residents who had to leave their homes to gather in a church while they waited for the evacuation order to be lifted.

Britain’s Electoral Commission has blamed “very short notice” from the government about the U.K. taking part in the European Parliament elections after many EU citizens complained that they were unable to vote in Britain.

The 3 million, a group lobbying for EU citizens living in Britain, says hundreds of Europeans from across Britain have reported being turned away from polling stations when they tried to vote Thursday.

The Electoral Commission said all eligible EU citizens can vote in their home country, but if they wanted to vote in Britain they needed to complete paperwork to transfer their right to vote to the U.K. The body said there wasn’t enough time to publicize the process ahead of the vote, which wouldn’t have been held in Britain if the country had left the EU in March as planned.

Prime Minister Theresa May’s spokesman James Slack said he recognized the “frustration” but said “the government doesn’t have a role in the administration of the polls.”

German Chancellor Angela Merkel’s party is offering talks with a YouTube star whose video attacking it has garnered 5 million views.

The YouTuber, who goes by the name Rezo, posted an expletive-laden rant Saturday, assailing the center-right Christian Democratic Union’s stance on climate change and social inequality. It also takes aim at the center-left Social Democrats and far-right Alternative for Germany.

CDU general secretary Paul Ziemiak said in tweets Thursday addressed to Rezo: “Let’s talk about your criticism of the CDU, but please also listen to how we see things.” He conceded that “we don’t do everything right.”

News agency dpa reported that the party abandoned the idea of having 26-year-old lawmaker Philipp Amthor release a counter-video.

Dutch Prime Minister Mark Rutte has cycled to a polling station to cast his vote in European Parliament elections.

The premier took a selfie Thursday morning with staff at the polling station — located in his former elementary school — and shook hands with students before cycling away.

Rutte acknowledged that the 28-nation European Union needs reforms, but reeled off a list of reasons why the Netherlands is dependent on the EU.

He says, “for our safety, for our jobs, for our prosperity, our stability, we need to stay a part of European Union.”

Rutte’s center-right VVD party is in a neck and neck race to become the largest Dutch party at the elections with the populist Forum for Democracy, which advocates a referendum on the Netherlands leaving the EU.

His centrist movement is struggling to charm voters ahead of France’s vote Sunday in European Parliament elections. So Macron hosted a meeting Thursday of a new body called the “environmental defense council,” modeled on how he handles national security.

He said: “It’s no longer time for words … We must make decisions.” He ordered his government to assess environment-related policies are and come up with new ideas by July — providing them with green-colored folders full of guidance.

Macron has stood up to U.S. President Donald Trump on the need to fight climate change, but is under fire from activists and voters who say he isn’t actually doing enough to protect the environment. Critics dismissed Thursday’s meeting as “greenwashing,” or repackaging policies with environmentally friendly language.

Meanwhile others say Macron’s climate policies are going too far, including many protesters behind France’s yellow vest movement.

Dutch polls have opened in elections for the European Parliament, starting four days of voting across the 28-nation bloc that pits supporters of deeper integration against populist Euroskeptics who want more power for their national governments.

A half hour after voting started in the Netherlands, polls open across the United Kingdom, the only other country voting Thursday, and a nation still wrestling with its plans to leave the European Union altogether and the leadership of embattled Prime Minister Theresa May.

The elections, which end Sunday night, come as support is surging for populists and nationalists who want to rein in the EU’s powers, while traditional powerhouses like France and Germany insist that unity is the best buffer against the shifting economic and security interests of an emerging new world order.

For more news from The Associated Press on the European Parliament elections go to https://www.apnews.com/EuropeanParliament