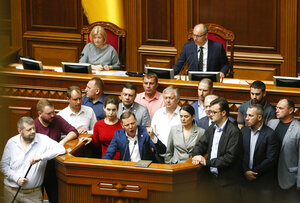 KIEV, Ukraine (AP) — Ukrainian lawmakers on Wednesday turned down the new president’s proposal to amend the election law in a blow to his hopes to get more of his supporters into parliament.

Volodymyr Zelenskiy, a 41-year-old comedian who won 73% of the presidential vote last month, dissolved parliament on Tuesday, saying that current lawmakers were too focused on self-enrichment and lacked public trust.

Zelenskiy, who became famous for playing the role of a Ukrainian president in a popular TV sitcom, was gambling that his popularity will allow his party to make a successful showing in the parliamentary vote set for July 21.

Zelenskiy proposed changes to the electoral law to have the next parliament elected entirely on party lists, arguing that the current system in which part of the legislature is elected in single-ballot races foments graft.

But lawmakers refused to consider Zelenskiy’s proposal. Former President Petro Poroshenko’s allies favor the current election system, hoping that it will help them keep their seats.

Zelenskiy criticized his foes and urged voters to elect a new generation of politicians.

“The old politicians chose the old system because it gives them a chance to extend their political existence,” he said on Facebook. “They hope to sneak back into the Verkhovna Rada, but I’m sure they are mistaken and you will elect the new politicians capable of changing the country in deeds, not words.”

Zelenskiy’s envoy to parliament, Ruslan Stefanchuk, accused lawmakers of breaking a deal on changing the electoral law he said had been agreed the day before.

“I hope that there is still some time left to force Verkhovna Rada to do its work,” he said.

Zelenskiy’s supporters have rejected the claim, saying that parliament long had lacked a majority coalition — a legitimate reason for its dissolution.

The parliamentary election was originally scheduled for Oct. 27. That would have left Zelenskiy facing a parliament dominated by his political opponents and unable to pursue his agenda for months.

Zelenskiy’s top campaign pledge was to bring peace to eastern Ukraine, where government troops have been fighting Russia-backed separatists for five years in a conflict that has left at least 13,000 dead.

Lawyer Andriy Bohdan, whom Zelenskiy named his chief of staff, said in televised comments Tuesday that a possible peace deal with Russia must be put to a referendum.

Poroshenko strongly criticized the idea, that such a referendum would “threaten Ukraine’s sovereignty and territorial integrity.”