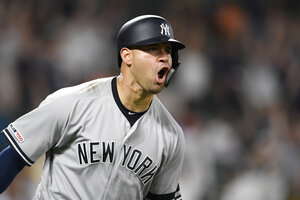 BALTIMORE (AP) — Late in the game with the outcome still not quite decided, the New York Yankees played up to their reputation.

At the same time, the Baltimore Orioles put all their youth and inexperience on full display.

Gary Sánchez hit a three-run homer in the ninth inning to cap a New York rally fueled by Baltimore gaffes, and the Yankees pulled out a 10-7 victory Monday night.

Gleyber Torres homered twice for New York, which trailed 6-1 after four innings and 7-3 after six.

“We are Yankees. We have a history, you know what I mean?” Torres said. “We want to go to the championship, the World Series, for sure. So we just prepare mentally right now and try to win and be positive.”

The rebuilding Orioles looked pretty good for six innings. Then, they fulfilled their stature as the team with the worst record in the AL. They threw to the wrong base, missed popups and were outscored 7-0 over the final three innings.

New York scored in the seventh on an overthrow by left fielder Dwight Smith Jr., who fell for a fake tag-up on third base. In the ninth, right fielder Joey Rickard threw to the wrong base on a single, Smith heaved the ball past the plate on Aaron Hicks’ tying sacrifice fly as Cameron Maybin took third, catcher Pedro Severino misjudged a foul pop that preceded a two-out walk to Luke Voit and Sánchez connected off Mychal Givens (0-1).

“We just did some things the last couple innings that allowed extra base runners, allowed runners to move up,” manager Brandon Hyde said.

Zach Britton (2-0) worked the eighth and Aroldis Chapman got three outs for his 12th save, ending by striking out Jonathan Villar with a 101 mph fastball.

New York’s third straight comeback win, sandwiched around a defeat on Saturday, was led by Torres. The shortstop is 17 for 35 against the Orioles with three multihomer games, and eight of his 10 home runs have come against Baltimore. Sánchez hit seven of his 13 versus the Orioles, who have allowed a major league-leading 97.

Hanser Alberto and Renato Núñez homered for the Orioles. Subbing in the leadoff spot for the slumping Villar, Alberto moved within a triple of hitting for the cycle by the fourth inning. He doubled in the first, added his third home run in the third and added an RBI single in the fourth.

After hitting a fly ball in the sixth, Alberto got his career-high fourth hit before Villar entered as pinch runner.

It was all for naught.

“There was a good vibe, you know, even though obviously it wasn’t going our way early and we were down big,” Yankees manager Aaron Boone said. “It was kind that theme in the dugout, just chip away at this.”

“To me this is the toughest one of the season for sure,” he said.

Not all the mistakes were made by Baltimore. Voit aided the Orioles when he allowed Trey Mancini’s foul pop to drop near first in the sixth inning and Mancini followed with a sacrifice fly.

Yankees starter J.A. Happ allowed six runs and a pair of solo homers in 3 2/3 innings, but New York’s comeback got him a no-decision. In four starts against Baltimore this season, the lefty has a 7.79 ERA. He has given up 13 homers in 10 starts.

Mechanical issues with the Yankees’ plane to Baltimore following a home weekend series against Tampa Bay forced the club to call an audible, with most of the team making the trip down the I-95 corridor Sunday by bus.

“Myself and a few coaches ended up taking a train down,” Boone said. “I think the bus ride was another one of those of those bonding experiences that guys have as players.”

Orioles: RHP Nate Karns (right forearm strain) was moved to the 60-day IL to make room on the 40-man roster for RHP Josh Lucas, whose contract was selected from Triple-A Norfolk. This is Lucas’ second stint this season with Baltimore.

Orioles: Rookie David Hess (1-5, 5.58) has gone seven straight starts without a victory, losing twice to the Yankees during that span.