Polanco has 4 hits, 4 RBIs in Twins' 9-5 win over Astros
Here’s A Map Of COVID-19 Cases By Zip Code: For more information click here. 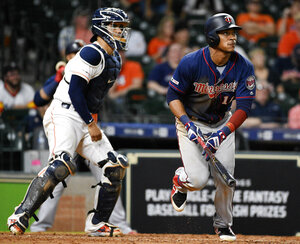 HOUSTON (AP) — After Jorge Polanco’s start to the season, Twins manager Rocco Baldelli is running out of things to say about his young shortstop.

Polanco had four hits, including a two-run homer, and drove in four runs to lead Minnesota to its fourth straight win, 9-5 over the Houston Astros on Monday night.

“We talk about him being hot, yeah he’s swinging the bat well, but it’s the quality of his (at-bats),” Baldelli said. “We talk about it every day before the game and every day after the game. He gives himself an opportunity because he swings at good pitches and he finds a way to get the barrel on the ball on a very consistent basis.”

Polanco is hitting .392. Three of his hits and all of his RBIs Monday came with two outs.

“It makes me feel good,” Polanco said through a translator. “Sometimes with two outs, you miss those opportunities, but I was grateful I was able to come through today.”

Max Kepler and Nelson Cruz had RBI singles around Polanco’s two-run single in a four-run sixth as the Twins built a 7-1 lead. Polanco homered in the eighth.

C.J. Cron put Minnesota ahead with a two-run double in the first, and Jason Castro led off the second with a home run that boosted the lead to 3-0.

“I think we are starting to show that we are a pretty good team, too,” starter Jake Odorizzi said. “The way we played tonight, I think we had six of the runs with two outs. Getting the big hits at the right time kind of energizes a team more so than putting them together early on.”

“Everything was working well off each other,” Odorizzi said. “I thought we mixed really well trying to keep them off balance in between swings.”

Houston has lost four of five since a 10-game winning streak. Brad Peacock (2-1) gave up three runs and five hits in six innings. Following a pair of relief appearances, he made his first start since April 7.

“It’s a few games in a row for us where we really haven’t gotten into the game very easily,” Houston manager AJ Hinch said. “I was happy with how he (Peacock) responded to it and got through five innings.”

Josh Reddick hit an RBI single that cut Minnesota’s lead to 3-1 in the fourth, then was thrown out at the plate trying to score on Tyler White’s two-out double as second baseman Jonathan Schoop made the relay from left fielder Eddie Rosario.

Carlos Correa pulled the Astros to 7-5 with a three-run homer in the seventh off Ryne Harper.

“I think if we get past the point of the first where we’re not down, I think we have a good shot going into it,” Reddick said. “This thing will pass.”

Twins: Kepler returned to the lineup after missing the previous series against Baltimore with an illness. RHP Blake Parker, who also had been ill, pitched the ninth in his first appearance since Wednesday.

Marwin González, who played his first seven seasons with the Astros, played in Houston for the first time since signing with the Twins as a free agent in the offseason. The Astros honored González, who still calls Houston home, with a pregame video. Gonzalez came onto the field, waved his hat to fans and pointed to his chest as the crowd gave him an ovation.