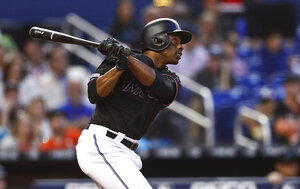 MIAMI (AP) — Less than 24 hours after firing their hitting coach, the Miami Marlins broke out against one of baseball’s best pitchers.

Curtis Granderson homered and the Marlins roughed up Max Scherzer in beating the Washington Nationals 9-3 on Saturday night to win a series for the first time this season.

“Obviously, a guy like Max, he’s like a freight train,” said Miami manager Don Mattingly, who celebrated his 58th birthday. “He’s going to keep coming at you the whole game. We had a lot of big hits in that game. I felt we had action all night and gave ourselves chances.”

Brian Anderson doubled twice and the Marlins finished with 11 hits in their first game under new batting coach Jeff Livesey. He was promoted when the team fired Mike Pagliarulo after Friday night’s 3-2 victory.

Nationals slugger Anthony Rendon exited after being hit by a pitch on the left elbow in the third inning. Rendon went 0 for 1, ending his 17-game hitting streak.

An X-ray revealed no fracture. His status for Sunday was unknown.

Miguel Rojas and Starlin Castro each had two hits for the Marlins, who can sweep the three-game series Sunday.

Granderson’s solo shot off Scherzer (1-3) in the fifth snapped a 3-all tie. Granderson, who entered the game hitting .137, drove a fastball to right-center for his third home run of the season.

Jose Urena (1-3) allowed three runs, two earned, and eight hits in six innings with four strikeouts and one walk. Three relievers combined to strike out seven over the final three innings for Miami.

“It’s extremely important to keep up with (Scherzer) and limit damage,” Urena said.

Scherzer was removed in the sixth after pinch-hitter Rossell Herrera’s infield single scored Rojas from third. Scherzer rushed from the mound to field Herrera’s short grounder and made an errant throw home past catcher Yan Gomes, allowing Isaac Galloway to score from second.

Granderson’s sacrifice fly drove in Herrera from second base after center fielder Victor Robles crashed into the wall and fell as he made the catch.

“He said his shoulder hit the wall pretty hard, so that was the concern. So we’ll see how he feels (Sunday) as well,” Nationals manager Dave Martinez said. “But he said he was OK.”

Scherzer was tagged for a season-high seven runs — six earned — and 11 hits in 5 1/3 innings. The three-time Cy Young Award winner struck out nine and moved past Don Drysdale for 35th on the career strikeout list with 2,493.

Scherzer entered 12-3 against the Marlins, including 5-0 last season.

“When you pitch down the middle in this league, you get hit,” he said. “They’re very familiar with my stuff and they’ve seen me over the years that when I leave pitches down the middle to these guys, they’re going to kill it.”

Howie Kendrick replaced Rendon and hit an RBI single in the fifth that tied it at 3.

Matt Adams’ two-run single in the third tied it before Miami regained the lead in the bottom half on Castro’s RBI single.

NO LONGER BY HIS SIDE

Pagliarulo’s dismissal prompted Mattingly to reflect on his former New York Yankees teammate and friend of more than 30 years.

“It’s one of those situations in professional sports that when things aren’t going well, one section is not going well, somebody usually pays for that,” Mattingly said. “Unfortunately, it’s the guy I’ve known for a long time, been friends for a long time. An extremely hard worker, cares, compassionate. It’s the nature of the business.”

Marlins OF Garrett Cooper (strained calf) will begin a rehabilitation assignment Sunday at Class A Jupiter. Cooper has been sidelined since March 31.