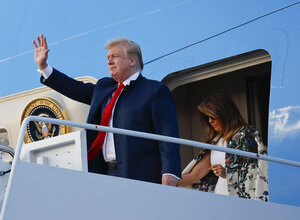 Trump is spending the Easter weekend at his private Mar-a-Lago club along with the first lady. The foursome played at Trump International Golf Club in West Palm Beach, Florida.

The trip comes one day after a redacted special counsel report found no Trump campaign collusion with Russia around the 2016 election, but issued no clear verdict on obstruction, while detailing several instances of Trump seeking to squash the investigation.

Prior to golfing, Trump lashed out through tweets at people who cooperated with Robert Mueller’s team. He said statements in the report made by some were “fabricated & totally untrue.”

Trump struck a much harsher tone than the day before when he marked the report’s release by tweeting “game over.”

He’s alleging that “notes” some people said they took after meetings with him didn’t exist until they were created for the Mueller investigation.

Trump says he never agreed to testify because he didn’t need to respond to what he says were “total bullshit” statements made about him in the report to make someone look good or make him look bad.

The chairman of the House Judiciary Committee has issued a subpoena for special counsel Robert Mueller’s report and the underlying materials.

Democratic Rep. Jerry Nadler of New York is asking for the information by May 1. That’s also the day when Attorney General William Barr is scheduled to testify before a Senate committee and one day before Barr is set to appear before Nadler’s committee.

The subpoena is the opening shot in what could be a lengthy legal battle.

If the Justice Department doesn’t respond, Democrats could hold officials in contempt of Congress or eventually fight the battle in court.

The Judiciary Committee voted 24-17 earlier this month to give Nadler permission to issue subpoenas for the final report, its exhibits and any underlying evidence or materials prepared for Mueller’s investigation.

Sanders also disputed allegations that she misled the media when she said that “countless” members of the FBI had lost confidence in FBI Director James Comey, which led to his firing.

Sanders had told reporters after Comey’s 2017 dismissal that she had heard from “countless” members of the FBI who welcomed the president’s decision.

She told ABC’s “Good Morning America” on Friday that her word “countless” was a “slip of the tongue” made in the “heat of the moment.”

The New York Democrat told ABC’s “Good Morning America” Friday that he is preparing a subpoena not only for Mueller’s complete report, but also for the underlying documents, including grand jury evidence.

He said, “We need the entire report, unredacted, and the underlying documents in order to make informed decisions.”

Attorney General William Barr sent the Mueller report to Congress, with some material redacted, including grand jury information. Grand jury evidence, including witness interviews, is normally off limits but can be obtained in court.

President Donald Trump sought the removal of special counsel Robert Mueller, discouraged witnesses from cooperating with prosecutors and prodded aides to mislead the public on his behalf.

That’s according to a hugely anticipated report from Mueller that details multiple efforts the president made to curtail a Russia probe he feared would cripple his administration.

Mueller writes that Trump’s attempts to seize control of the investigation, and directions to others on how to influence it, “were mostly unsuccessful, but that is largely because the persons who surrounded the President declined to carry out orders or accede to his requests.”