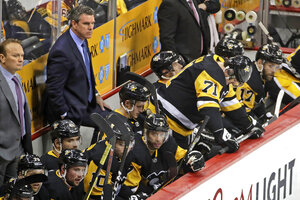 Scotty Bowman had already coached six teams to the Stanley Cup championship when his high-powered Detroit Red Wings that won 12 of their first 14 playoff games couldn’t get the puck away from the New Jersey Devils and got swept in the 1995 final.

“They just shut us right down,” Bowman said. “We were shocked, but it happens.”

The coach with the most Stanley Cup rings in NHL history wasn’t as shocked to see the Tampa Bay Lightning get swept out of the first round this postseason after tying the single-season wins record set by his 1995-96 Red Wings and finishing 21 points ahead of the rest of the league. He wasn’t surprised, either, when the same thing happened the same night to the Pittsburgh Penguins after they won two of the past three championships.

The defending Stanley Cup champion Washington Capitals are deadlocked with the playoff newcomer Carolina Hurricanes at two games apiece. If the Calgary Flames can’t come back from a 3-1 series deficit against Colorado, it will mark the first time each conference’s top seed is eliminated in the first round.

More than any other sport, playoff hockey is a much different animal than the regular season because of increased emphasis on scouting and preparation, fewer penalties and even-strength goals, and more all-out shot-blocking and sacrificing. The way games are coached, played and officiated changes enough that the Lightning can go from being the best team for seven months to gone in seven days.

“The ice shrinks and you have less time, less space, the hits are harder, guys are not preserving energy over the course of a game,” said NHL Network analyst Mike Rupp, who won the Cup in 2003 with New Jersey. “You’re exhausting it every shift.”

Tampa Bay looked so exhausted after winning 62 of 82 regular-season games that it lost four in a row to eighth-seeded Columbus, which didn’t even clinch a playoff spot until game 81. The Blue Jackets were by far the better team, and Bowman — who lives in Florida and frequents the Lightning’s press box — saw a totally different Tampa Bay team without top defensemen Victor Hedman and Anton Stralman because it couldn’t move the puck up ice without a strain on the top forwards.

Bowman compared it to what Detroit would’ve been like without Hall of Famer Nicklas Lidstrom, who hardly ever made a mistake with the puck and made everything happen. The Lightning ran into a tough John Tortorella-coached forecheck, struggled to control the game against the disciplined Blue Jackets and all their star power couldn’t dig them out of a deep hole.

“During the season, Tampa would have the puck so much, the other team would get four, five or six penalties and, boom, their power play was at 28 percent and had the most goals in the league,” Bowman said. “They were so hard to play against all year because they forced the other teams to take penalties. (Hedman and Stralman) are bringing the puck up, they’re in the (offensive) zone. The game changes.”

That problem isn’t limited to the Lightning. Two-time playoff MVP Sidney Crosby was limited to one point in the Penguins’ sweep at the hands of the New York Islanders, and Calgary’s Johnny Gaudreau has one point through four games against Colorado.

Tampa Bay, Calgary and Pittsburgh all ranked in the top six in the league in scoring during the regular season. When Hall of Fame defenseman Scott Stevens does an autopsy on the Lightning and Penguins’ quick playoff exits, he sees fundamental problems in other areas.

“I saw two teams that don’t defend very well, really don’t have a lot of structure in their D-zone and they didn’t have anything to fall back on,” said Stevens, who won the Stanley Cup three times with the Devils and now is an NHL Network analyst. “They weren’t able to score goals, and they weren’t able to defend and therefore they’re not playing anymore.”

Belying a common misperception, scoring isn’t down much in the postseason so far: an average of 5.8 goals over the first 31 playoff games compared to 6.0 in the regular season. But after 77.8 percent of regular-season goals came at even strength, that number is 59.4 percent so far in the playoffs, which means each power-play goal is all the more important.

“You want to stay out of the penalty box,” Stevens said. “There’s teams that their power play might’ve been average during the year but they find a way to get a few in the playoffs and make a difference and that can win a series for you.”

Of course, there are fewer penalties called this time of year. The NHL has said it wants officials to call games the same way in the playoffs, but referees don’t want to overreach when games are so tight.

“I was always told that penalties are like money and it’s like other people’s money in that you should be frugal with them unless the action demands a call,” said retired referee Paul Stewart, who worked 49 NHL playoff games during his career.

Stewart likens the first two rounds of the playoffs to a guy being so excited for a date that he gets a speeding ticket on the way, and because of that officials need to take extra care to rein in players. It’s easy for him to understand why players feel like there’s less room on the 200-by-85-foot ice surface than during the regular season because he has seen it up close.

“Players tend to cover a lot more ice because their speed level and their intensity level is up and where they might’ve dogged it a step or two here or there, they seem to put a little more churn in the butter,” Stewart said. “They’re getting from point A to point B a lot faster and then they’re going to point C and point D where during the regular season they might only get to point C and now they’re hitting D, E and F because they’re all jacked up and they want to make sure that every 45-second shift is momentous for them.”

Stevens said a great regular-season team’s confidence can evaporate quickly and lead to a long summer of reflection.

“The teams that are undisciplined, the teams that get away from their game quickly and can’t stay with their game tend to get in trouble because you become a little reckless, you don’t manage the puck and then they feed the other team’s offense and then they tend to find themselves chasing,” Stevens said. “They just have no answer and it’s frustrating for that team that can’t find their game, has no answers, the adjustments don’t work and you’re still working hard, you’re trying hard but you can’t find a way to win.”