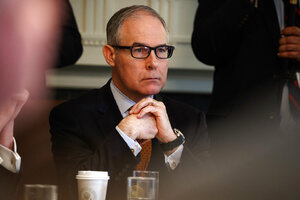 WASHINGTON (AP) — Scott Pruitt, the scandal-ridden former head of the Environmental Protection Agency, registered as an energy lobbyist in Indiana on Thursday as fossil-fuels interests there are fighting to block the proposed closure of several coal-fired power plants.

A lobbying disclosure report for Pruitt provides little insight into precisely what he’s doing in Indiana, but several clues point to work on behalf of the coal industry. The disclosure report lists an address for Pruitt in an office tower in his hometown of Tulsa, Oklahoma, and says he is a self-employed consultant who will be lobbying on issues involving energy and natural resources.

Pruitt’s sole client is listed as RailPoint Solutions LLC, a Delaware corporation created in January that has no listed street address or website. But Pruitt’s form lists the name Heather Tryon as the company’s manager. That’s also the name of the chief financial officer of Terre Haute-based Sunrise Coal, which operates four coal mines in the state.

Tryon’s husband, who answered her home phone, said she was not immediately available to comment.

Pruitt, who was Oklahoma’s attorney general before being tapped as EPA administrator, did not respond to a voice message or an email seeking comment on Thursday evening. His lobbying filing was first reported Thursday by The Indianapolis Star.

Two Indiana utilities recently announced plans to shutter nearly all their coal-fired power plants in the state. The Indiana Coal Council has filed appeals with state regulators seeking to block the plant closures. Meanwhile, some Republicans in the state House have been pushing a measure that seeks to put a moratorium on the construction of new gas-fired power plants or wind farms.

Although Pruitt’s disclosure form lists him as self-employed, state records indicate the paperwork was filed by Christi Heiney, an employee at Bose Public Affairs Group. The Indiana-based lobbying firm represents an array of clients that include energy and electricity companies. Heiney did not respond to a voice message or email Thursday evening.

As EPA administrator, Pruitt was a staunch advocate for the continued use of coal and other fossil fuels while often downplaying the potential risks from climate change. He was forced to resign last year amid a wave of ethics scandals, including living in a bargain-priced Capitol Hill condo tied to an energy lobbyist.