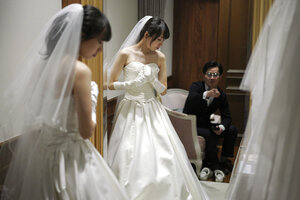 TOKYO (AP) — Japan is getting ready for its biggest celebration in years with the advent of the Reiwa era of soon-to-be emperor Naruhito. That means big opportunities for businesses hoping consumers will splash out on long holidays and memorabilia.

Many Japanese will get their longest ever “Golden Week” holidays, 10 days to mark May 1’s beginning of the new era following Emperor Akihito’s abdication on April 30, and some are taking advantage of deep discounts. The expected downsides: monster traffic jams and struggles to keep store shelves stocked with so many people getting time off.

“Since we are hosting a few events, it’s expensive. So I really wanted an affordable wedding ceremony,” Yanagihara said as she scrolled through wedding dress dress options during a fitting. “The timing was good, and it’s so helpful to have such sales campaigns.”

The transition from the Heisei era of Akihito to the upcoming Reiwa era is a rare opportunity to celebrate: the Heisei era came amid mourning for Akihito’s father, the late emperor Hirohito, a time of somber restraint.

Many Japanese hope for better times in the Reiwa era: recent decades brought the bursting of the country’s bubble economy and long spells of recession. Many companies aim to make the most of the opportunity with “last of Heisei” tours, events and goods ranging from calendars and stamps to bean buns, T-shirts and candies.

“Compared with the year before, this January, February, and March we’ve had a 10% surge in visits,” said Masayuki Katsuta, a marketing manager at LEC, the wedding salon arranging the Watanabe-Yanagihara nuptials.

“There is a celebratory mood ahead of the abdication this time,” Nagahama said.

Part of the extra spending will go to revisions of stationery, calendars, government forms and other items that need to be changed to reflect the change of era.

The Western calendars that prevail in most countries are widely used in Japan, but in many instances government and business documents and stamps used in official transactions use imperial dates.

Stamp company Kippodo has been getting 300-500 orders daily for new Reiwa era labeling stamps since the name for the new era was announced on April 1.

“In recent years, with the development of technology, stamp businesses haven’t gotten so many orders. But we see this as a business opportunity. The era change is a good thing,” said Shigeo Kojima, managing director at Kippodo.

Analysts say that spending, particularly in tourism sectors, would also get a boost as the era change will extend Japan’s usual “Golden Week” holiday period to 10 days, from April 27-May 6.

Breweries are boosting output in anticipation of a spike in demand, and department stores have stockpiled commemorative items.

On the flip side, with many factories planning to go idle for a week or more some businesses will take a hit from the long break. Others are straining to prepare: with roads likely to be jammed by 25 million holiday travelers, logistics companies anticipate bottlenecks and delays in deliveries in this country where just-in-time supply systems prevail.

Those on tight budgets are not so thrilled with plans by theme parks and other attractions to raise prices for the holidays. Non-salaried hourly workers will lose income.

A survey by the news agency Jiji Press found 40% of those interviewed were unhappy about the looming holiday, outnumbering the 36.5% who were glad.

“Only the wealthy are rejoicing: Forget about this 10-day holiday!” exclaimed a headline in the tabloid Shukan Gendai.

Watanabe said the decision to get married now — the ceremony is on Friday — was not really tied to the end of the Heisei era. But his fiancee’s birthday is in April, so it seemed like a good time to tie the knot.

“For us, this year will be one with many memorable events. So for us, the last year of the Heisei era is one we won’t forget,” he said.