Lynx to retire Lindsay Whalen's No. 13 at June 8 game 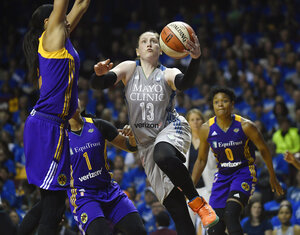 MINNEAPOLIS (AP) — The Minnesota Lynx will honor Lindsay Whalen by making her jersey the first to be retired by the 20-year-old franchise.

The Lynx announced Thursday they’ll hang Whalen’s No. 13 from the Target Center rafters on June 8 against the Los Angeles Sparks. Shortly after a news conference held inside the arena where Whalen played nine of her 15 years in the league with the Lynx and won four championships, Whalen threw out the ceremonial first pitch at the Twins game next door at Target Field.

“I don’t know if you can live a more charmed sporting life than what Lindsay Whalen has lived in Minnesota,” Lynx coach Cheryl Reeve said.

Whalen is now the head coach at her alma mater, the University of Minnesota. The gritty point guard retired after the 2018 WNBA season.

“None of this would happen if the team didn’t have success,” Whalen said. “My jersey wouldn’t be up there if we didn’t win four championships.”

Whalen played overseas in the winters and spent her first six years in the WNBA with the Connecticut Sun. But she spent the majority of her playing career in her home state, from Hutchinson High School to the Gophers to the Lynx. She seized on an opportunity at the news conference to make a sly recruiting pitch for the Gophers to any local prep prospects who might have been watching.

“Good things happen when you stay at home,” said Whalen, who won Olympic gold medals with Team USA in 2012 and 2016.

She’s the all-time WNBA leader with 323 wins in 477 career regular-season games, and she’s second behind former Lynx teammate Rebekkah Brunson (57) with 54 victories in the playoffs. Whalen is third on the league’s all-time list with 2,345 assists, trailing only Sue Bird and Ticha Penicheiro. She’s the only player in WNBA history with at least 5,000 points, 2,000 assists and 1,500 rebounds.

“It just shows what you can do when you work hard, but more than anything when you surround yourself with really great people,” Whalen said.

The WNBA season begins May 24.