3,000 evacuated from New Zealand fire can return home
Listen to KDWN on Your Amazon Echo Device. Here’s How: You can now keep up with all your favorite KDWN Talk shows (Kilmeade, The Vegas Take, Hannity, Levin, The Steve Sanchez Show, Sports X Radio)… 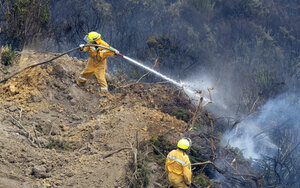 WELLINGTON, New Zealand (AP) — About 3,000 people who fled as a wildfire threatened a New Zealand town were allowed to return home Monday as firefighting conditions improved.

Another 400 residents living in valleys near the fire aren’t yet able to return, although officials hope they will be able to soon.

Firefighters say they’ve gained the upper hand over the blaze thanks to favorable weather conditions. The forest fire began nearly a week ago on the South Island and burned 2,300 hectares (5,700 acres). It burned down one house and prompted evacuations beginning Friday.

“It’s a large fire, and the fact that we’re able to get residents back into Wakefield this afternoon is extremely positive news,” said Civil Defence Minister Kris Faafoi.

He said residents who return need to be prepared to evacuate again if conditions change. But he added that he’s hopeful valley residents will also be able to return home soon.

“The feedback that we’ve had from those who were at the frontline of this fire was that there was a real intensity to this fire, that the drought-like conditions they’re experiencing contributed to that,” Ardern said.

About 190 firefighters, 10 helicopters and two planes were deployed to battle the fire. No significant rainfall is forecast in the area over the next two weeks, and authorities say they expect they will need to keep dampening down hotspots until March.

Authorities believe the fire was started by sparks from farm equipment.

Australia and New Zealand have been experiencing a hot Southern Hemisphere summer.

Australia sweltered through its hottest month on record in January and there have been wildfires razing the south and flooding in the tropical north. New Zealand’s weather hasn’t been as extreme, although it did experience a heatwave over the last few days of January.