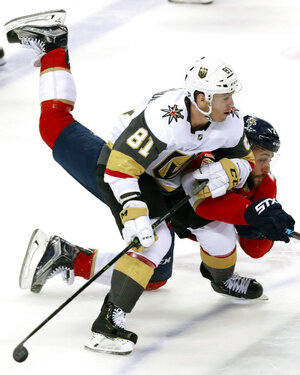 SUNRISE, Fla. (AP) — The Florida Panthers are trying to regain the momentum they had entering the All-Star break.

Hoffman broke a 1-1 tie when he grabbed a loose puck along the boards on the right side, skated in, and slid the puck between Marc-Andre Fleury’s pads with 13:47 left in the third. Hoffman leads the Panthers with 24 goals.

“It seemed like whoever got that next (goal), it was going to be the deciding one,” Hoffman said.

The win was the Panthers’ fourth in five games after losing their previous seven.

“We were in the same situation,” coach Bob Boughner said. “Last night, unfortunately, we couldn’t find the second goal when we needed it. Tonight, we did.”

Aleksander Barkov had a goal and an assist, and Frank Vatrano also scored for the Panthers. James Reimer made 34 saves.

“Obviously, last night we didn’t get the job done,” Reimer said. “We battled hard tonight and I thought we deserved it.”

Vegas lost its fourth straight game for the first time in its short franchise history.

“We can’t think about the streak. We have to think about the little things, one shift at a time, one shot at a time,” Fleury said. “It’s frustrating because we’re not used to this. We’ve got to find a way to get out of this streak, this bad streak, quickly.”

It doesn’t get any easier for the Golden Knights as they play at Tampa Bay on Tuesday.

Barkov put the Panthers up 1-0 just 12 seconds in. Barkov grabbed a loose puck at center ice and fired it past Fleury.

Barkov’s goal missed the franchise record for fastest goal by two seconds. That record is shared by Johan Garpenlov (Oct. 17, 1996 against Colorado) and Barkov (April 5, 2016 against Montreal.)

Vegas tied it at 1-all on Pacioretty’s goal. He punched in a wrist shot from the bottom of the left circle at 8:07 of the first.

Evgenii Dadonov was awarded a penalty shot after he was tripped by Brayden McNabb at 57.9 of the first, but his shot went off Fleury’s thigh and hit the crossbar.

NOTES: Panthers forwards Derick Brassard and Riley Sheahan each made their debut after being acquired in a trade with Pittsburgh on Friday. Brassard recorded an assist. … D MacKenzie Weeger returned after missing four games with a concussion. … The Panthers honored former captain Olli Jokinen as part of the club’s 25th anniversary ‘Legacy Saturdays’ series before the game. … The Golden Knights are 12 for 12 on the penalty kill in their last six games.