CARSON, CA - OCTOBER 07: Derek Carr #4 of the Oakland Raiders runs out of the pocket during the second half of a game against the Los Angeles Chargers at StubHub Center on October 7, 2018 in Carson, California. (Photo by Sean M. Haffey/Getty Images) 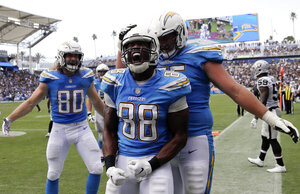 CARSON, Calif. (AP) — The Los Angeles Chargers’ offense was stuck in neutral for the first 25 minutes of Sunday’s game against the Oakland Raiders. A broken play provided the needed spark.

The game was tied 3-3 until Austin Ekeler took Philip Rivers’ swing pass and turned into a 44-yard touchdown . That was part of 19 straight points by the Chargers en route to their 26-10 victory over the Raiders.

“We were doing OK. We weren’t playing great but that kind of sparked it,” said Rivers, who threw for 339 yards and two touchdowns. “We got another stop and then punched it in. I felt then we were in control the rest of the way.”

Rivers bobbled the shotgun snap on the first-and-10 play, but quickly corralled it and got it to Ekeler while three Oakland players were blitzing. The second-year running back eluded two Raiders at the 40 and then got a good block from Keenan Allen up the left sideline to score his third touchdown of the season with 4:04 remaining in the second quarter.

“I just saw the pressure coming off the edge. And it was a hot call, so it was coming to me right away,” Ekeler said. “I just ended up catching the ball and looking downfield from there.”

The Ekeler touchdown was one of four plays of 25 yards or more for the Chargers (3-2), who are third in the league with 29 plays of 20 yards or more; the Rams and Chiefs each have 30.

Melvin Gordon had 120 yards from scrimmage (58 rushing, 62 receiving). His 1-yard run during the second quarter gave Los Angeles (3-2) a 17-3 lead at halftime. The scoring drive started after Jahleel Addae recovered a Martavis Bryant fumble at the Raiders 45.

The Chargers’ defense had three sacks and forced two turnovers which resulted in 13 points. Oakland’s Marshawn Lynch came into the game fourth in the league in rushing but was held to 31 yards on nine carries.

“It’s an energy game, man, and you got good energy built all around you, that’s what it is all about,” Gordon said. “We got to feel off that. That’s how we become a great team.”

Derek Carr was 24 of 33 for 268 yards for the Raiders (1-4). He accounted for Oakland’s lone touchdown in the fourth quarter on a 1-yard pass to Jordy Nelson which brought the Raiders within 26-10.

He also had a costly interception in the end zone to Melvin Ingram during the third quarter. The Chargers turned that into a 96-yard, eight-play drive that was capped with Rivers’ 13-yard TD pass to Virgil Green early in the fourth period.

“We had bad plays today,” Raiders coach Jon Gruden said. “I think we pressed a little bit. The play calling needs to improve. That’s my job. We’ve got to play better collectively than we did today.”

The crowd at StubHub Center was predominantly Raiders fans, but it didn’t matter to the Chargers, who have won seven of their last eight at their temporary home until the new stadium at Inglewood opens in 2020.

In order to silence their “home” crowd, the Chargers did take the ball on offense after they won the coin toss. They turned that into a seven-play drive and a 49-yard field goal by Caleb Sturgis.

Ingram’s third-quarter interception was his first in 82 regular-season games. He did have an interception in the 2013 playoffs against Cincinnati.

The seventh-year defensive end also got his first NFL carry in the second quarter on second-and-goal from the Oakland 1 but was stopped for no gain.

“I touch the ball all the time in practice. It was just fun,” Ingram said. “Being in the offensive huddle it felt like I was at home.”

The Chargers signed punter Donnie Jones to be the new holder for Sturgis, but Sturgis still missed an extra point.

Sturgis’ PAT attempt after the Green touchdown bounced off the upright for his fourth miss of the season and third in the past two games. The sixth-year kicker has missed four extra points this season, equaling the amount he had over three seasons in Philadelphia from 2015-17.

Sturgis was also 2 of 3 on field goals. His 48-yard attempt on the last play of the first half was on line until it veered wide left at the last moment.

“The extra point did bother me a little bit, but we’ll figure out what happened there,” Chargers coach Anthony Lynn said. “He’s been kicking with a lot of confidence, so I’m not concerned about it.”

Chargers: at Browns next Sunday.