Poland's ruling party leader says he has no plans to retire
Here’s A Map Of COVID-19 Cases By Zip Code: For more information click here. 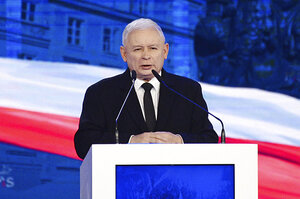 WARSAW, Poland (AP) — The 69-year-old leader of Poland’s ruling party says he has no plans to quit politics, even as he’s pushing judges to retire earlier.

Critics accused Jaroslaw Kaczynski on Monday of double standards. His Law and Justice party is forcing judges to retire at 65 — five years earlier than before — as part of a judicial overhaul that has put Poland at odds with European Union leaders.

Asked about a successor, Kaczynski said that being 69 in politics “is certainly a lot, but it is not yet retirement age.”

He pointed to the example of former German Chancellor Konrad Adenauer who took the position in 1949 at the age of 73.

Kaczynski had recently been hospitalized for a knee problem that has raised questions over his health condition and who would succeed him.

He is to undergo a knee surgery but is currently involved in a campaign ahead of the Oct. 21 local elections in which his party is hoping to strengthen its grip on power.

Kaczynski founded Law and Justice with his identical twin brother, the late President Lech Kaczynski, who was killed in a 2010 plane crash.