Khan, once a cricket star, now pious, anti-poverty reformer
Good Advice From The CDC: While the immediate risk of this new virus to the American public is still believed to be low at this time, everyone can do their part to help respond to this emerging health threat. 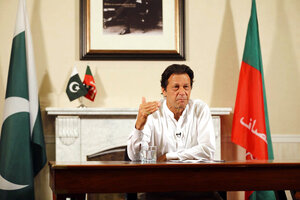 He says he also wants good relations with his neighbors and the United States, but also has leveled criticism against them.

Once a celebrity playboy, Khan now embraces conservative Islamic stands and keeps company with radical clerics who often espouse a philosophy that frightens Pakistan’s minorities. He calls for an Islamic welfare state that provides progress and education for the poor.

Khan’s stands on some key issues:

Pakistan’s powerful military establishment has directly or indirectly ruled the country for most of its seven decades of existence. Khan dismissed widespread allegations of manipulation during the election campaign by the military and sidestepped discussion on its role in civilian affairs, by simply saying the army is Pakistan.

ON THE TREATMENT OF WOMEN

Khan has publicly expressed his admiration for the justice dispensed against women by “jirgas” — or councils of elders. These councils have banned women from voting, given children to old men to marry in order to settle disputes, and ordered a woman to be stripped naked and paraded through a village for a dishonor or crime committed by a male relative. Khan also has attacked Pakistan’s political liberals and berated Western feminist ideals, saying it degrades motherhood.

ON THE BLASPHEMY LAW

Khan campaigned openly promising to support and defend Pakistan’s blasphemy laws. Rights groups and minorities say the measures are often used to settle local scores. The laws, which carry an automatic death sentence, sometimes have incited mobs against entire neighborhoods at the merest suggestion that blasphemy has been committed.

ON THE RELATIONSHIP WITH THE U.S.:

Khan has been critical of the U.S. -led invasion of neighboring Afghanistan and drone strikes that have killed militants — and sometimes civilians — on the Pakistani side of the border. He says former Pakistani leaders have sold out the country’s pride for billions of dollars in U.S. aid. He says he wants good ties with Washington but on an equal footing, calling the current relationship one-sided.

Khan denies allegations by the U.S. and Afghanistan that Pakistan assists or harbors Taliban militants, and his statements on the issue mirror the flat-out denials by the army.

Khan has been a strong proponent of talks with Pakistan’s Taliban and has said the emergence of the group in the border areas is a reaction to the U.S. intervention in Afghanistan. He said that the presence of international troops in Afghanistan has hurt Pakistan and strengthened the militants.

Khan says he wants good relations with neighboring India but said the core of their differences is the disputed Kashmir region, which is divided between the two nuclear powers and claimed by both. Khan says there is a desperate need for an international reckoning of the widespread human rights violations being committed by Indian troops against Kashmiris. He said the two countries have to end the tit-for-tat accusations.