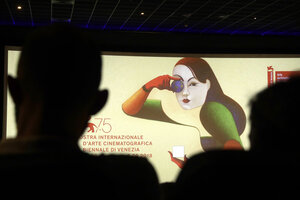 The 75th edition of the world’s oldest film festival opens on Aug. 29 with the world premiere of “First Man” by Damien Chazelle. Like his previous film “La La Land,” which also opened the festival and earned six Oscars, it stars Gosling, who plays Armstrong.

“The Ballad of Buster Scruggs” is the new offering from the Coen brothers. It started out as a television series before being turned into a movie featuring Tom Waits.

Emma Stone, Olivia Colman and Rachel Weisz star in an irreverent royal comedy set in the early 18th century called “The Favourite,” by Yorgos Lanthimos, which also makes its debut on the Lido.

Tilda Swinton and Dakota Johnson are paired in the horror movie “Suspiria” by Luca Guadagnino, who earned acclaim for last year’s “Call Me By Your Name.”

Among other films being shown for the first time are “Roma,” Alfonso Cuaron’s first film since “Gravity;” Mike Leigh’s “Peterloo,” about an 1819 massacre in northern England; and “Sunset” by Hungarian director Laszlo Nemes, who captured the 2016 Academy Award for Best Foreign Language Film with “Son of Saul.”

Debuting out of competition for the Golden Lion are Bradley Cooper’s “A Star is Born,” in which he stars alongside Gaga, and the police abuse drama “Dragged Across Concrete” with Mel Gibson and Vince Vaughn.

Golden Lions for career achievements will be presented to British actress Vanessa Redgrave and Canadian filmmaker David Cronenberg at the festival, which runs through Sept. 8.