Documentary tells dark tale of triplets separated at birth
Good Advice From The CDC: While the immediate risk of this new virus to the American public is still believed to be low at this time, everyone can do their part to help respond to this emerging health threat. 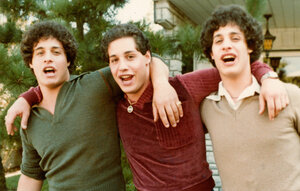 NEW YORK (AP) — The first time that brothers David Kellman, Bobby Shafran and Eddy Galland were in the public eye, it was joyous. The then 19-year-old identical triplets, separated at birth, had just learned about the others’ existence.

Despite growing up separately, the three big-smiling, curly-haired kids smoked the same cigarettes and finished each other’s sentences. They appeared on shows like Phil Donahue, became early ’80s tabloid regulars and even made a cameo alongside Madonna in 1985’s “Desperately Seeking Susan.” They opened a restaurant in New York’s Soho called Triplets Roumanian Steak House.

“We were sort of falling in love,” Kellman recalls in the new documentary “Three Identical Strangers.”

Their second go-around has been more complicated. Galland killed himself in 1995. And the disturbing reasons for their separation only emerged after that initial glow of reunion. “Three Identical Strangers,” directed by British filmmaker Tim Wardle, is the stranger-than-fiction tale behind their story, one of the more disquieting cases of separation at birth.

Since its Sundance Film Festival debut, the film — a real-life roller-coaster ride into a dark and twisted history — has astonished and infuriated moviegoers in equal measures. It has renewed pressure on a prominent child development center to make the study transparent. And it has returned the remaining brothers to the spotlight under far less festive circumstances.

“When we went through the limelight before it was celebratory. It was all fun,” Kellman, now 57, said in an interview. “Is this somewhat enjoyable? Yeah, but it brings up a lot of pain too.

“Seeing it in the theater really got me,” he added. “I cried like a baby.”

“Three Identical Strangers,” which opens in theaters Friday, is about a much-documented case that had largely receded from public memory. After the triplets found each other in 1980 (Shafran, remarkably, arrived at an upstate New York community college only to find everyone already knew him, believing him to be the already-enrolled Galland), another discovery followed.

The triplets, born in 1961, were placed with three families — one upper class, one middle, one working — by the now-defunct Louise Wise Agency as part of a study about nature vs. nurture by the Child Development Center. The center would later merge with the Jewish Board of Family and Children’s Services, a large, 140-year-old New York nonprofit.

The study — which encompassed an unknown number of twins — was conducted through the 1960s and ’70s by Dr. Peter Neubauer, a prominent, Austrian-born psychologist who died in 2008. Without the knowledge of the children or their parents, researchers studied the children’s development right until the triplets showed up on TV.

“I don’t know what these people are going to do, if anything. I just know what they did was wrong,” said Shafran. “They can blame people who are no longer alive, but it’s an institution, a continuing institution. The entire study should just be open for starters.”

The files from the study, stored at Yale University, will not be unsealed until 2066. Some heavily redacted research was shared by the Jewish Board with Kellman and Shafran but only in the final days of post-production on “Three Identical Strangers” after months of effort by the filmmakers and family. “It was pulling teeth to get every page,” said Kellman.

“They wouldn’t talk with us during the film,” said Wardle. “They’d only engage with us via a crisis management PR firm which they had hired. They would only engage with the brothers via a medical malpractice attorney. I would say the Jewish Board was extremely unhelpful.”

A spokesperson for the Jewish Board declined to specifically address those claims or answer questions regarding the study’s release. It responded with a statement to The Associated Press.

“We do not endorse the Neubauer study, and we deeply regret that it took place,” said the statement. “We recognize the great courage of the individuals who participated in the film, and we are appreciative that this film has created an opportunity for a public discourse about the study.”

Several other sets of twins involved in the study have also found themselves, including Elyse Schein and Paula Bernstein, who penned a 2007 memoir, and Doug Rausch and Howard Burack, who appeared on “20/20” in March.

“Most of the people I’ve spoken to involved in the study just want to know: Was anything learned?” said Wardle. “Me and my producer would sometimes leave an interview going, ‘Oh my goodness! This story is incredible! I can’t believe it! And then you’d think later: Actually, this was these guys’ lives. We’d have to remind ourselves that this wasn’t just a great story. This was something these guys lived through.”

Shafran, a Brooklyn attorney who has two children with his wife of 30 years, criticizes the Jewish Board for “shrouding this whole thing in secrecy.” But he has little hope that they can provide anything like catharsis for him and his brother. Their story has previously been told in a 1995 New Yorker piece on twins by Lawrence Wright, who turned it into a book. But aside from another documentary last year, “The Twinning Reaction,” the brothers had retreated from talking publicly, they said.

But “Three Identical Strangers” has been an unexpectedly rewarding process for the brothers. Shafran recalls being moved watching the gasping faces of a Sundance audience following their bizarre journey. The brothers weren’t especially close at the time of filming, but the movie helped repair their relationship.

“You don’t get together with siblings as much as you’d like. That’s just life,” said Kellman, who works in insurance and lives in New Jersey. Kellman, who has children similar in age to Shafran’s, said he’s currently going through a divorce.

And they’re resolutely impressed by both Wardle’s film and his sensitivity throughout the filmmaking process. They greatly prefer their experience as documentary subjects to “lab rats.”

But ask them for their own conclusions about what their story means in terms of nature vs. nurture, and they’re at a loss.

“It’s very difficult for me to watch this movie in an objective fashion,” says Kellman. “In order to get into the nuances between the brothers as individuals, you’d have to make a much longer movie, a movie that no one would sit through. Because it’s our lives.”